You are here: Home>Blog>Extra, Extra, Read All About It? Newspapers and the Past

Extra, Extra, Read All About It? Newspapers and the Past 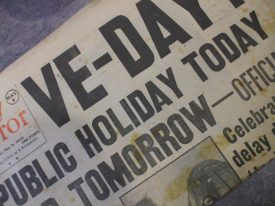 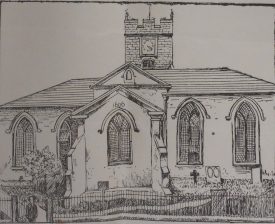 All Saints before it was rebuilt.
From the Nuneaton Chronicle Supplement of May 30th 1890.

So this month sees cross my path a copy of the Daily Mirror from VE Day, 1945. Interesting in its own right, but not Warwickshire related…

So this was found at Princes Drive recycling centre, Leamington Spa by a member of the team who work there, along with some other old newspapers. Just recently, we’ve conducted a project with Orbit Heart of England, that has seen topics appear on the website on all manner of subjects, including memories of being evacuated from Birmingham to Stratford during World War Two. Now, in one week on the project, we used prompts to provoke memories, add a hook to stories… and what better way to do this than via newspapers? As this topic shows, VE Day memories relevant to the county (both old and new) are still waiting to be captured, and prompts can be useful.

It’s not just in this respect that newspapers can be helpful. When I’m not working, every now and again you can find me flicking through copies of old newspapers, to add colour to articles (what a hobby!). In the instance of the VE Day paper, you can see how it might be useful in adding a spot of context to the article about Nuneaton welcoming Field Marshall Viscount Montgomery – the centre spread on the paper positions Montgomery as key to the war effort, re-emphasising his pre-eminent position in the historical narrative..

Adding colour can be seen in features such as that discussing the Rebuilding of All Saints Church, Bedworth. The contemporary thoughts add a context and insight that mere reporting of the facts doesn’t necessarily give.

Yet what has proved particularly interesting to me are the letters pages. What these show is that who controls the discourse can often give a very different perception of the same action. Joseph Underhill, the Pailton Miser exemplifies this point. Read the newspaper report on the inquest into Underhill’s death and a Mrs. Robins has a small but unfortunate footnote in history, publicly chastised for allowing Underhill to live in squalor. Read on into later editions however, and an alternative view of Mrs. Robins is presented through the letters pages. Who’s right? Well to an extent that’s not what interests me. What fascinates me is the to-ing and fro-ing of viewpoints, and an attempt to position the ‘truth’.

We see something similar when Holy Trinity Church opens in Rugby. Here, the conversation continues over a number of editions. Although the thrust of the article was always going to be about the church itself, as I read the letters pages I got drawn into the cut and thrust of one Matthew Lowe trying to defend his reputation. We see playing out a cultural history, a struggle for legitimacy, and a struggle within the confines of what was deemed both acceptable and insulting behaviour, according to the time.

So don’t ignore the letters pages of newspapers, for much can be gleaned about people who otherwise struggle for a voice when ‘official’ histories are written. And don’t ignore newspapers as a whole, or what’s seemingly chip wrapping paper. The past, after all, can lurk in the most surprising places… including your local recycling centre.

Many local papers for Warwickshire can be found at the Warwickshire County Record Office. Do please visit, and view them. If you have a Warwickshire story to tell, perhaps you might like to see if any colour can be gained from the Nuneaton Chronicle, Rugby Advertiser, Leamington Courier or more besides!