You are here: Home>Blog>Volunteering for Warwickshire Bytes 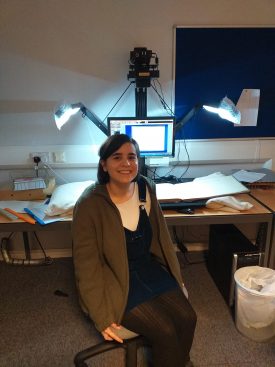 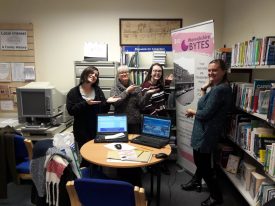 Andrea with colleagues at Atherstone Library for the Warwickshire Bytes project.
Image courtesy of Benjamin Earl

A year ago, when I started to think about the possibility of spending a year abroad studying, I knew nothing about this part of the country. I had always wanted to do an Erasmus placement and when this opportunity appeared and I looked at the options I immediately thought that the best one would be England, as I wanted to make sure that I wouldn’t have any problem with the language. I soon noticed that England is very different compared to Spain. The first months were difficult, especially the winter. I was not used to it being night at 4pm, neither was I used to the wet and cold. I remember I used to feel really sad because in November at 8pm the streets were already empty. I felt really homesick during that time.

My way to the Warwickshire Bytes project

After those hard months things started to get better as I began to get used to the new place in which I was living. By then I had some free time so I started to look for chances to volunteer. I wanted to get to know more about the region. Currently I am studying history and I am also a former Conservation and Restoration student, so I was sure that I wanted to spend my time in something related to my biggest passions: heritage and history. That is why I applied for museums and archives, although archives were always my first interest as I knew that back in Spain I wouldn’t be able to do it (volunteering at archives without previous experience is not possible in Spain), and I had already considered being an archivist as a career path. The department of history told me there was a chance to volunteer at Warwickshire County Record Office and I took it almost immediately.

In my first day at the office I was really warmly welcomed and I could feel calm even though I was worried before, especially as English is not my first language. The Senior Archivist and members of the Warwickshire Bytes project showed me around. We gathered and discussed the different tasks I would be able to do within the Warwickshire Bytes project, tasks that seemed really interesting. That included the digitisation of 19th century depositions, something that I started to do the very first day. I was able to learn quickly how to do it and in great company.

The plan was that I would do the indexing of those depositions that I had digitised, something that I really enjoyed because of my interest in palaeography. I had already worked on palaeography but only on medieval handwriting, so this gave me the opportunity to explore different kinds of documents. In addition, reading those depositions was a fun thing to do and I learnt a lot about Warwickshire history. I took part on one of the library sessions that the project was carrying out with the purpose of spreading the project around the county, and this allowed me to understand the project better.

I also had the chance to volunteer in a museum, which I was looking forward as well. I spent one day in the Market Hall Museum where I had the task of choosing some of the items that will be part of the Warwickshire in 100 Objects project, something that I appreciated a lot since it made me feel like I contributed in it.

Overall, this internship at Warwickshire County Record office has fulfilled and even surpassed my expectations. It gave me the chance to work in an archive as well as in a museum – the two things that I wanted to do – and helped me in a professional sense by, for example, improving my palaeography skills.  I am really grateful for this opportunity and for how greatly the team has treated me. I have learnt a lot about this wonderful region of England and it has allowed me to discover Warwickshire history, get involved in the local community, and to feel England is more like a home.