You are here: Home>Blog>Warwickshire Bytes, Toronto and the Leamington Connection 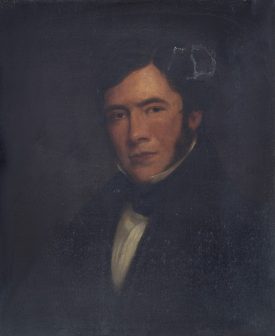 A portrait of James Brown by the painter Frederick Rosenberg.
Image courtesy of Leamington Spa Art Gallery and Museum 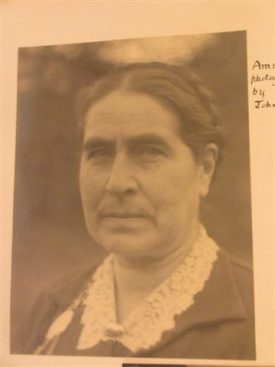 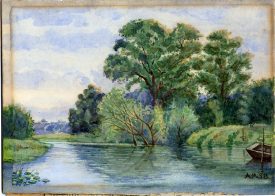 Watercolour of a river scene looking from Castle Bridge towards Leamington.
Image courtesy of Leamington Spa Art Gallery and Museum

We know it’s a small world and this is wonderfully demonstrated by the Warwickshire Bytes Deposition Indexing Project, which has recruited volunteers from around the world with connections to the county. These volunteers are transcribing 19th century witness statements from criminal court cases.

Some of those taking part in the project might be hoping to find evidence of a criminal ancestor or two in these depositions, but one of the international volunteers has told of a much more respectable lineage based around the town of Leamington Spa.

Eileen Ansell is currently living in Toronto, but her third great grandfather, builder James Brown helped to shape the development of Leamington in the 19th century and 100 years later, her great aunt, Amy Mary Spenlove Brown donated over 50 items to Leamington Art Gallery and Museum.

James Brown became a successful builder and carpenter in Leamington and his main work was as a property developer, building and selling ‘higher end’ properties.  However, he also worked tirelessly for the benefit of his community, joining the town’s paving committee to develop new roads, improving the street lighting and subscribing to numerous appeals, including one to cultivate the newly-christened Jephson Gardens in the early 1840s.

He took on the role of clerk to the parish of All Saints and was heavily involved in the rebuilding of the church in 1843 until funds ran out some years later.  Work finally resumed some 18 years later, but James Brown had died in 1854 and was never to see the rebuild completed.

His portrait was captured for posterity by the painter Frederick Rosenberg and was donated to Leamington Art Gallery and Museum by his great granddaughter, Eileen’s great aunt, Amy Mary, in 1946.  She also donated a series of her own watercolours, as well as wide range of domestic items including a parasol, boot hooks and embroidery samplers.  James also appears in some of the Warwickshire County Record Office documents of the time.

Eileen and her family have done a huge amount of work on their history and she continues to see her connections to the county as she works through her transcriptions.

“I love doing the transcribing as so many of the place names are in my family tree.  It is like a little window into the year 1835 in terms of activities, occupations and crimes,’ she said.