You are here: Home>Blog>Getting Our Bearings: First Forays into Mining Maps and Plans

Getting Our Bearings: First Forays into Mining Maps and Plans 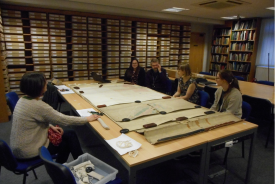 The team assemble in the searchroom at the record office to consider some of the collection’s older and more fragile maps.
Image courtesy of Warwickshire County Record Office 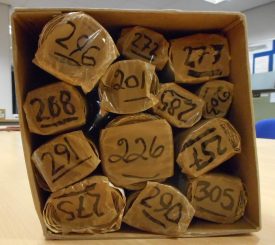 A lot of the maps have been packed so tightly in boxes it’s hard to get them out.
Warwickshire County Record Office reference CR3418/Box M1 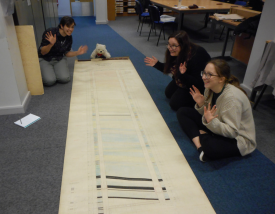 Part of the Mining the Seams project involves working through the 26 boxes and 13 loose shelves of maps that we have in our coal mining collections. These need to be sorted and catalogued, ready for you to look at! As Warwickshire County Record Office is closed to the public on Mondays and Tuesdays, we decided that those days would be the perfect opportunity to get our bearings and determine the scale of the collection.

And of course, an opportunity for a quick blog post (with a few puns thrown in to theodolite-n the mood).

As soon as we opened the first box, we realised that the task may take a little longer than we anticipated. The boxes are filled with rolls of maps and some of the rolls contain 15+ maps.  Donata, our Conservator, estimates that there are over 750 maps and plans in the collection.

So far we have come across:

The seam plans were interesting because they are drawn in different colours to represent the different depths of the seams.  The plans that have multiple seams on one sheet have to be imagined in 3D, which takes a bit of getting used to.

As we haven’t seen these maps before, it would have been easy to get disoriented and so we decided to invite Louise from Glamorgan Archives down for the day to give us a hand. Louise was the archivist for a similar project that took place at Glamorgan recently, and so she was able to give us some insight and background knowledge on what the maps were and how they would have been used.  Thanks for your help Louise, you’re a legend!

Towards the end of the day, just as our energy levels began to subside, we came across something which sent our excitement off the charts!  It was a Section Plan, beautifully coloured to show the different strata (or layers) of the rocks, soil, clay and coal at Arley Colliery.  This plan was so big that it wouldn’t fit on our tables and so we had to roll it out on the floor!

In the great tradition of Facebook memes, we decided to tag ourselves as our favourite stratum.  Katie chose ‘Stoney White Marl’, Laura picked ‘White Sandstone’ and Beck went for ‘Bind with Ironstone Balls’!  Strangely enough, no one was too keen on ‘Dark Clunch’1, ‘Dun Dicks’2 or ‘Bottom Sloom’3…

All in all, a successful recce into our collection of plans. We’re definitely moving in the right direction…

1 A clay or mudstone, with rootlets, forming the floor of a coal seam.

3 A thick layer of clay at the bottom of a coal seam.