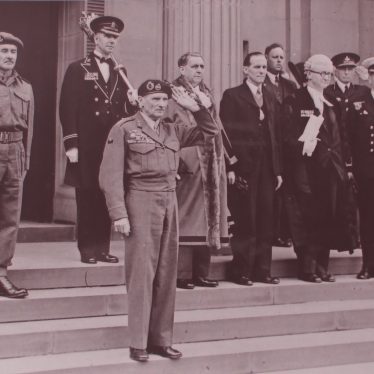 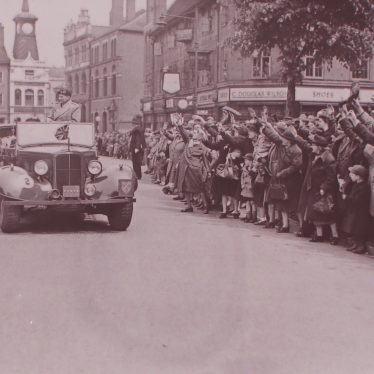 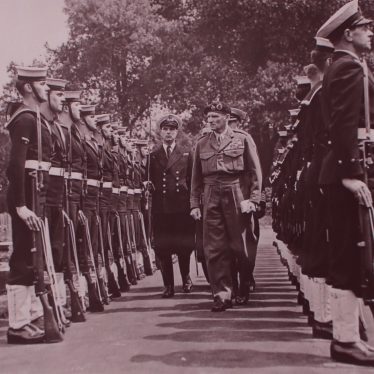 On Friday June 11th 1948 the Nuneaton Observer reported on the grandiose visit by the Chief of the Imperial General Staff, to unveil the new inscription on the Riversley Park War Memorial to the serving men and air raid victims who fell during WWII.

The ‘familiar bereted figure’ drove from the Long Shoot-Watling Street junction to the Council House in his famous Humber “Victory” car, escorted by civic and other representatives.

At the Higham Lane junction school children had gathered and cheered, buoyed by the car slowing down and Montgomery recognising their welcome. Furthermore, the Observer noted ‘deafening cheers from the huge crowd in Coventry Street and the Coton Road when the “victory” car drew up at the Council House’. Instead of driving to the park he walked on foot, through the crowd, with the Mayor. The Observer writes ‘There was an unforgettable scene in Riversley Park where a vast throng of people had gathered.’

The Field Marshal proceeded to inspect the guard of honour, provided by H.M.S. Gamecock, and ‘took a special interest in the “Gamecock” mascot, “Jimmie,” a striking cock bird, which made its first public appearance on the occasion of Princess Elizabeth’s visit to Coventry.’

I am very glad to come here today to perform the unveiling of the War Memorial. The inscription has been altered so that this fine monument may preserve the memory of those gallant men and women of Nuneaton who gave their lives during the Second World War.

I have been very moved by this ceremony, especially as it takes place in the county of Warwickshire. My own connections with this county are very close. As a young office, I was commissioned into the Royal Warwickshire Regiment and the whole of my regimental service was spent in it. It was in these earlier days of my Army career that I learnt the groundwork of soldiering. Now I have the honour to be the Colonel of my Regiment.

The …Observer reported ‘The solemnity of the occasion was deeply felt as the Field Marshal unveiled the inscription and then stood to attention before the memorial as “The Last Post” was sounded. Then followed an impressive two minutes silence.’