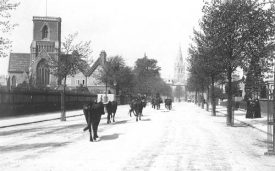 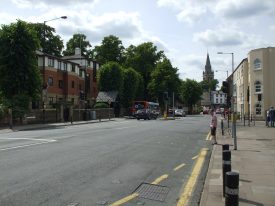 Holy Trinity church was opened in 1854 as a Chapel-of-Ease to St. Andrew’s, building work having started in 1852. The total cost was £7,250. Designed by Sir George Gilbert Scott, famed for his Gothic revival style and his prolific contribution to church design, the Architect’s drawings for the building include one for a spire. This spire was never built however, owing to the ground on which the church stood not being firm enough. The opening service on April 20th was a great event, and the Rugby Advertiser of 6th May 1854 reported how the church was “one of the most splendid specimens of the early decorated style of architecture of the 19th century.”

The opening of the church

The Advertiser also mentioned how a large crowd of people came to witness the ceremony. This crowd brought with it some problems. One Matthew Lowe wrote to the paper complaining that a policeman refused him entry, and took umbrage at being called an “obstinate fellow.”1 Over the coming weeks, there followed correspondence between Lowe and ‘a policeman’ where the policeman claimed their instructions “were to keep as strict order as possible, to admit everybody who wanted to attend the service, but not those who just wanted to look around out of curiosity.” The policeman claimed that “Mr Lowe came blustering forward… in opposition to reason or resistance, without stating whether he intended to go into church or lurk round the entrance.”2 Lowe again, was keen to deny he was ‘blustering’ or ‘lurking’!

The church closed in 1974, and was controversially demolished in 1983, with the site being used for retirement flats. The lych gate survives, and is dedicated to members of the congregation who were victims of the Great War. The dedication service was held on June 23rd 1921.