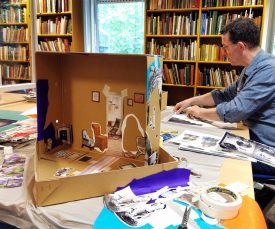 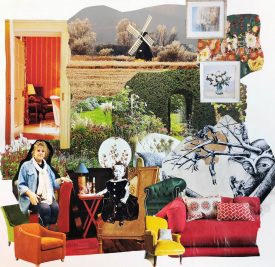 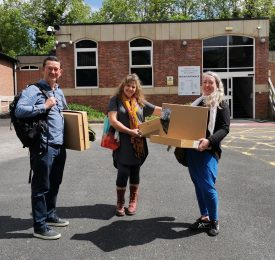 A Space to meet

The Near Belonging group meeting at Warwickshire County Record Office has been making what I suggested could be called ‘archive box homes’. Each participant was given an old record office conservation grade archival box. These are made from heavyweight compressed card, rather like board, and have an unattached lid the same depth as the base.

I also gave each participant printed cut-outs of their portrait and the portrait of the person from the Robert Graham Studio Collection that they’d adopted. I provided old interiors magazines and pens and suggested they make a home or a photo studio set, somewhere suitable for the two portraits to ‘meet’.

This potentially daunting task brought out fantastic responses and discussions. Iain decided on a conceptual backdrop, using colours and textures that progressed from greys on the left through to full colour on the right, representing a journey through time and emotion.

Julie’s box quickly became filled with colour and texture, with a collage of warm furnishings, inviting chairs and pictures of gardens and landscapes. She placed herself and her adopted child portrait either side of an occasional table and included lots of spare chairs, “to suggest all the other people who are welcome and who might come to visit”.

Kate found the activity made a profound connection to her memories and experiences. Tentatively placing open doorways and empty seats, she talked about a time when she was “drifting”; sleeping on friends’ sofas and in borrowed spaces. She now cherishes her own space, her own set of keys, but needs longer to build confidence about where she could place herself in this newly imagined home to share with ‘Ana’, her adopted portrait.

There’s something very powerful about making images and models, especially whilst talking and assembling ideas as a group. The thoughts we have and the words we say take on a physical shape and can look back at us, claiming their own space in the world and challenging us to own or reject them as beliefs. We can see whether they belong, or not.

There was no pressure on participants to take the box homes away to work on them further, but I’m really pleased everyone decided that they would. It feels like a significant barrier has dissolved between the climate-controlled sanctity of the archive and the chaos and reality of everyday life. These selected portraits from the Robert Graham Studio Collection are now out, being seen in completely new and uncontrolled contexts, (please see my previous blog, Meeting across time) with the opportunity of inspiring new connections.