You are here: Home>Blog>Analysing Accidents: Teasing Meaning out of Compensation Registers 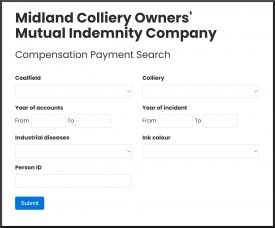 Screenshot of the new searchable database of compensation payments paid to mineworkers across Warwickshire, Derbyshire, Nottinghamshire, Leicestershire, Staffordshire and Shropshire, 1899-1940. 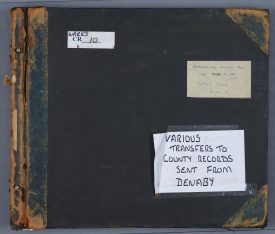 What happened? This is the question that usually arises when we talk about accidents, whether at work or otherwise. The question is, of course, loaded with different connotations: who was involved in the accident? How many people? A man, a woman, a child? Were they injured, and how? How serious was the injury – did the person survive it? And, of course, what caused the accident in the first place?

These questions have guided countless court cases, both in the UK and around the world, especially since the mid 19th century, when a number of countries began seeing court rulings on, and also legislating about, liability for accidents. England’s first major policy in 1846 related to liability, and dealt with compensation for railway passengers who were injured in train wrecks. Over time, and especially as workers began to unionise, workers began demanding compensation for accidents, too. Initially, they had little luck in making their claims. For example, an 1837 verdict argued that workers knew about the risks associated with their jobs, so they could not receive compensation if something went wrong.

By the late 19th century, attitudes had changed dramatically. In 1880, an Employers’ Liability Law meant that employers would need to compensate injured workers if the employer could somehow be found responsible. Workers would need to go to court to make their case, and doing so was often difficult, potentially costly and could also cost them their jobs. By 1897, a new Workmen’s Compensation Law guaranteed compensation for all work-related accidents in industries that were seen to be especially dangerous. It is no wonder that mining was one of the first industries on the list.

As a result, we have a rich treasure trove of records in the UK about compensation for accidents in mining. However, how do we go about analysing these records? The Midland Colliery Owners’ Mutual Indemnity Company (MCOMIC) database of compensation registers gives us some clues. In particular, it can tell us three important things about the history of workplace accidents and how they were handled in the UK in the early 20th century.

The value of an injury

First, it gives us some insights into how much injuries were worth. In the UK, as elsewhere, compensation for accidents was based on the idea that an injury (or death) prevented a worker from earning his or her full wages in the future. For example, in losing a hand, a worker could not work to full capacity in most jobs. Compensation amounts were meant to accord with these potential lost wages. The MCOMIC registers do not spell out the exact nature of injuries, though they show whether compensation was for industrial diseases or one-off accidents. Nonetheless, they give us an idea about how much injuries were worth.

Second, the registers tell us about the demography of accidents: who was injured? We have a detailed list of names over time, and we can cross reference these with other files to know more about the individuals involved.

Not least, the registers give us some new insights into the state of the mining industry itself: were accidents becoming less typical over time, and why? Were there fewer claimants over time, and why? Was mining on the way out, or was it becoming safer? Which collieries had particularly high rates of accidents?

When it comes to analysing accidents, the MCOMIC database is especially valuable because it enables us to look into these issues over a long period of time, and to quantify compensation rates easily. Since the handheld notes of individual logs have been transcribed, they have been rendered not only keyword searchable but also easier to tabulate. In conjunction with reading court records, accident reports, broader business records (including from insurance companies as well as collieries) as well as personal accounts, these compensation registers can help us to understand better the complex history of accidents in mining in the UK.

The MCOMIC database was compiled from a series of 26 compensation registers held at Warwickshire County Record Office (reference CR3418/1-26), and allows for statistical analysis of compensation payments paid to mineworkers across the Midlands.

Dr Julia Moses is a member of the academic panel for the Mining the Seams project.