You are here: Home>Blog>How Do We See the Past? Lithographs Edited

How Do We See the Past? Lithographs Edited 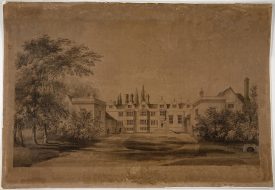 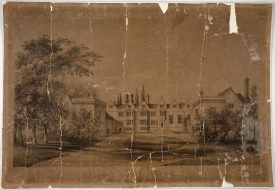 So the first picture is Warwick Priory, originally on the site of what is now Warwickshire County Record Office, and subject of a prior (no pun intended) article on the site. The lithograph captures the site well, and shows the imposing nature of the building in its heyday.

But is it actually ‘real’?

The second image is the original lithograph. Somewhat more battered, torn… but surviving.

I don’t pretend to be an expert with such packages, but the first image was my attempt to see what GIMP (The Gnu Image Manipulation Program to those who care) could do. On the right hand side, indeed, the original was so stained it needed some radical solutions. The lowest bush on the right is, in fact, a copy of part of the bushes on the left!

So it’s a sleight of hand (or mouse!). Does it have a worth, though? It appeals to my sense of aesthetics above the original, but then we choose to present many historic buildings as ruins, too – the days of the likes of Castell Coch being rebuilt are currently out of fashion, in favour of maintaining what survives today.

What do you think? Is there a place to intervene in representations of the past? If so, when? Let me know and leave a comment.