You are here: Home>Blog>Near Belonging: Echoes 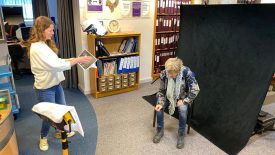 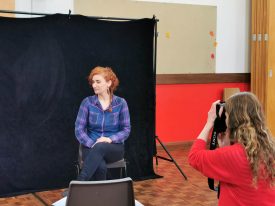 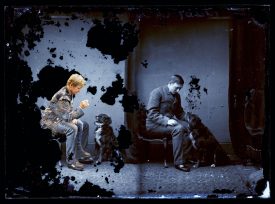 Part of the ‘adoption’ process for participants has been having their portrait made in a similar pose or style to the archive image. Very few people like having their photograph taken and this is usually everyone’s least favourite part!

The Robert Graham Studio Collection portraits are staged and very static compared with modern portraits, where even in a studios setting a ‘natural’ aesthetic is usually sought. How many quirky angles have you seen in current popular studio portrait styles? Those angles all help to suggest movement and life.

The uncomfortable experience of recreating this has seemed valuable for participants. Trying to copy the position, being very self-conscious about expression and clothing, has led to further conversations about how the original sitters of the 19th and 20th centuries might have been feeling.

Stiff and serious looking old portraits are a fairly familiar sight but there are a few in the Robert Graham Studio Collection that include unconcealed smiles and impatient dogs, which suggests some of this stiff posing was more to do with fashion than technology.

People often recall hearing that it was because of long exposure times that people look so serious; it would be impossible to hold a natural-looking smile for the 20 minutes needed for an early daguerreotype. However, during the period Robert Graham was operating his studios in Leamington (1868- 1925 in three consecutive, ever expanding premises) photographers were able to use electric light and natural light in combination to reduce exposure times to seconds.

The participants for Near Belonging face a different issue; I’m using digital rather than film photography and so have the modern habit of taking many photographs. Each may only take a second but for the sitter, being directed by me and by others in the group, those seconds add together and feel much longer. The huge advantage, at least, is that they can see the image on the camera as instantly as I can; together we can look, laugh or grimace and decide where adjustments could be made. It’s fairer but I appreciate it’s still uncomfortable and I’m very grateful for everyone who’s braved my camera to make this part of the Near Belonging idea possible. I know the results will be worth it and am sharing just one example now, I’ll post the others in the next blog.