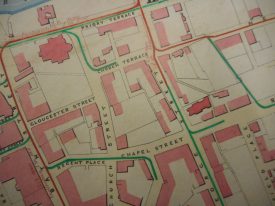 A map of the area around George Street from around 1856.
Warwickshire County Record Office reference CR1538/193 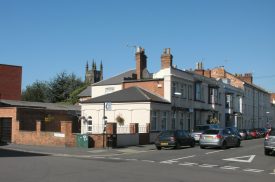 A map of the area around George Street from around 1856.
Image courtesy of Richard Neale 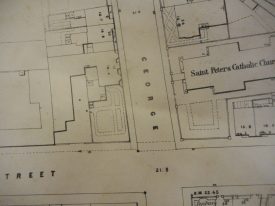 A map of the area around George Street from around 1852. It also shows the large garden.
Warwickshire County Record Office reference CR2743/3. 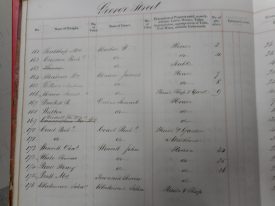 The first thing to say is that until some time between 1876 and 1880, the property was actually numbered as 9 George Street.  It changed to number 22 when the street was renumbered to take account of new properties that had been built, filling in gaps where gardens etc. had been

With the exception of the parish church, the premises now occupied by H.J. Dawson can probably lay claim to having the longest association with the care of the dead and the bereaved of any building in Leamington.

From the evidence I have been able to find, an undertaking business has been run from these premises since at least 1866, when Morris & Co.’s directory for that year lists the occupier as William George Bloomfield – a builder, undertaker, and contractor of 9 George Street and Chapel Street.

The association may go even further back than that, as, although living at what was then number 26 George Street, Mr. Bloomfield is listed as being the occupier of the workshop and yard at number 9, going back as far as 1856. He took over the whole of the property between October 1861 and October 1862, running his business from there until his death on 25th April 1906.

Following the death of William Bloomfield, the property and the business was taken over by Henry John Dawson, whose name it bears to this day.

Early maps of the area show that the property once had a fairly large garden on the corner of Chapel Street and George Street. Most of this has now been built on as new offices have been added since the first in 1925.  However apart from that, it probably looks much the same as it did when built almost 200 years ago.

The 1861 census shows an Elizabeth James living in the property, who seems to have been running it as a lodging house. The rate books for 1860, 1859, and 1858 show an Esther Stanley as resident. There is no occupant listed for 1856 though, as mentioned above, William Bloomfield is listed as occupier of the workshop and yard.  From 1855 back the occupier of the whole property is a James Brown, who the 1851 census records as a Builder and Carpenter employing 12 men and three boys.

The rate books number the majority of the houses in George Street back to 1836, and on each occasion James Brown is listed as resident of number 9. The books from 1835 back do not give numbers but by looking at the people either side, we can tell James was still at the same address in 1835. He does not appear in George Street in any of the books for the years before 1835, but it listed as owning a number of properties in Chapel Street back to 1833 .

As the rate book for 1830 only lists four properties in George Street and none in Chapel Street, it is probably fairly safe to assume that James Brown built what is now 22, George Street in 1834.