You are here: Home>Locations>Warwick>Canaletto, Wright of Derby, Turner and Constable - Capturing Warwick Castle 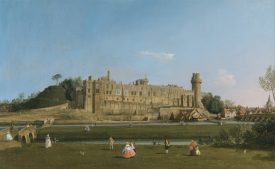 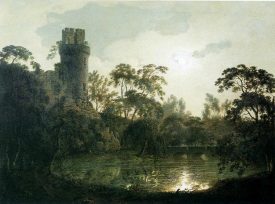 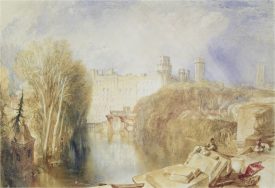 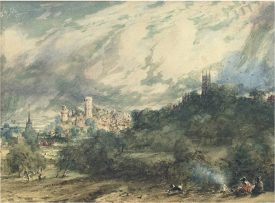 Constable - A view of Warwick from the Kenilworth Road.
© Christie's Images Limited 2016

To identify exactly what inspires great works of art is an impossible task. However, when presented with the ideal subject artists often flock to paint, draw or sculpt it.

Warwick Castle, one of Britain’s best preserved medieval buildings, has attracted artists for hundreds of years. During the 18th and 19th centuries almost all of the great landscape artists in Britain came to paint and draw views of the building and surrounding landscape.

Discounting a few naïve paintings from the late 17th centuries, the first great artist to paint the castle was the Venetian painter Giovanni Antonio Canal (1697-1768), known as Canaletto. He produced no less than five pictures of the castle for his patron Francis Greville (1719-1773), later first Earl of Warwick, which rank amongst some of artist’s finest views of Britain.

These delicate and precise landscape paintings document the changes Francis was undertaking to his ancient gothic castle, including the romanticisation of the gardens and park by Lancelot ‘Capability’ Brown. In some respects the views act as ‘before’ and ‘after’ shots to be admired by their proud patron. Later in 1764, after Canaletto had returned to Venice, Francis Harding completed a view of the South Front showing the final improvements made by the Earl to modern tastes (now in the Paul Mellon Collection, Yale).

In summer 2014 a painting by Joseph Wright of Derby (1734-1797) entitled ‘Moonlight, with a Lake and a Castellated Tower’ and dated 1787, was re-identified as a view of the castle and river Avon. The unmistakable shape of Caesars Tower, soaring over the thick vegetation and old medieval bridge, dominates this atmospheric night time scene.

This picture serves as a departure from Canaletto’s views of the castle as Wright did not depict the architecture as an end in itself, but used it as a way to evoke the romantic associations of such an ancient building. Although no study of the castle by the artist survives, the town’s central location means that he may have passed through it at some point during his travels. The canvas appeared in an exhibition at the Tate in 1990, with the view and castle described as “imaginary”, and was last recorded in an unknown private collection in Montreal.

Joseph Mallord William Turner (1775-1851), soon to be the face of the new £20 note, made at least two journeys to Warwick. His first visit, made in 1794 during a trip to the Midlands, resulted in several fine drawings and delicate watercolours. Other leading English watercolourists, such as Francis Towne and Paul Sandby, captured similar views of the castle from differing aspects in the same fashion. A later visit, made in 1830, saw Turner produce several fascinating brightly coloured incomplete studies and one exquisite watercolour, reproduced on this page.

Turner’s use of vivid colours and atmospheric rendering transforms the view of the castle into a dramatic and exciting work of art. His manipulation of the view, to include the town and church, shows the artist’s intent to adapt the view to suit the excitement of the picture. Indeed, Caesar’s Tower may have been the inspiration for the architecture in Turner’s historical inspired Boccaccio’s Relating the Tale of the Bird-Cage (1828), now in the collections of Tate Britain.

John Constable (1776-1837), an artist famed for his nostalgic views of the English countryside, also made a visit to Warwick in 1809. He produced several remarkable drawings, including a quick and boldly drawn view of the East Front, capturing an instant reaction to the imposing medieval towers and walls. Constable also made a sketch of the town, including the Church towers of St Mary’s and St Nicholas’, from the Priory Park. Decades later, in 1830-1831, he returned to this very subject with an impressionistic watercolour of the castle and town.

These four artists are only a brief handful of those who were inspired by the historic and romantic associations of the castle and town. The outstanding views, available to all who visit, will no doubt continue to serve artists and photographers for years and centuries to come.