You are here: Home>Locations>Kenilworth>The Siege of Kenilworth

The Siege of Kenilworth 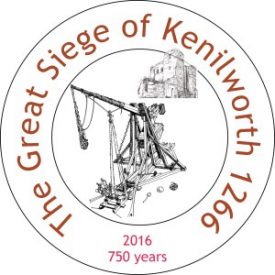 Painting of Kenilworth Castle in 1840
Painting by James Ward, and originally uploaded to Wikimedia Commons

The Siege of Kenilworth was part of the second Barons` War and lasted from June to December 1266. The 750th anniversary will be celebrated in Kenilworth in September 2016.

In 1263 English nobles rose in revolt against King Henry III in what became known as the Barons’ Wars. The dispute was over the noble’s attempts to rein in Henry’s extravagant spending. Under the Provisions of Oxford some of the King’s power was transferred to a council of Barons. The King wanted to ignore the provisions, which led the Barons to revolt. At first the revolt was successful. Prince Edward was captured and imprisoned in Kenilworth Castle. However, he escaped and rallied the King’s men. At the battle of Evesham in 1265 the rebels suffered a stinging defeat in which their leader, Simon de Montfort, was killed. Some of the rebels took refuge in Kenilworth Castle and from this strong base the rebels continued to cause trouble for the King.

The King tried to negotiate a peaceful resolution but the rebels were defiant, and severed the hand of a royal envoy sent to negotiate with them. The King offered the rebels terms of surrender spelled out under the Dictum of Kenilworth. The terms set the costs for the rebels to buy back their lands, which had been seized, and required the men responsible for maiming the King’s envoy to serve seven years in prison. The rebels refused the terms. The King prepared to take the castle by force.

The siege of Kenilworth Castle was the longest in English history. The attackers tried everything to take the castle using a variety of siege weapons, including trebuchets and siege towers. Their attacks focused on the north wall, which was judged to be the weakest part of the defences. The defenders used the lake to bring in supplies, so the attackers built rafts and barges to stop them. They also tried to attack the castle by crossing the lake on barges. Finally, after nine months, disease and hunger forced the garrison to surrender. Under the terms of surrender, the rebel barons were allowed to buy back their lands, which had been seized by the king. The siege cost a fortune, and ten counties were excused from paying their taxes for two years due to the cost they had incurred in support of the siege. The castle was given to Henry’s younger son, Edmund, Earl of Lancaster.

Kenilworth will have various celebrations to recognise the anniversary, details of which may be found at the Kenilworth Siege website.

The majority of the content above is taken from a description by Matt Fritz and used with permission.

You can find photos of a 700th anniversary event on this page by Ian Sanday.

Further information on the siege can be found on Kenilworth History and Archaeology Society’s website.