You are here: Home>Locations>Warwick>‘Out Guising’: Gender Transgression in Warwickshire Postcards 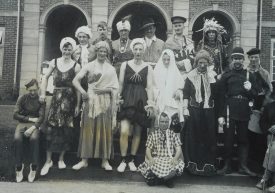 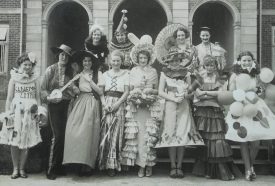 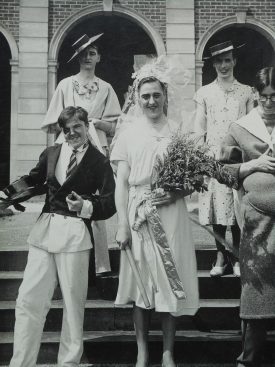 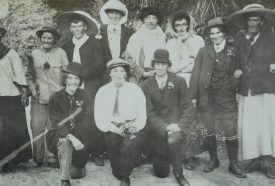 A postcard of 'Meg' and their friends out guising on New Years, c. 1910
Warwickshire County Record Office reference PH1035/B6721

Fancy dress, or ‘guising’, has been a pastime throughout Warwickshire’s history. On these occasions, people were free to enact different roles, or even perform different genders.

A set of postcards from outside the King Edward VII Memorial Hospital, Warwick, demonstrates this perfectly.1 In the ‘men’s’ group picture we see a number of dresses (including a little thigh-high number) and some elegant wigs and make-up. In the the ‘women’s’ group picture, we find a luxuriant moustache and a ‘Spanish lady’ has her arm locked with her trousered partner. In one of the images, the revellers stage a mock wedding with rather masculine-looking bride and bridesmaids. An unrelated postcard, signed by a person named Meg, shows a group of people paired off in couples; the ‘boys’ wearing skirts and bonnets, the ‘girls’ wearing waistcoats and trousers.2

These photographs raise some interesting questions about the expression of gender identity during carnivals or fancy dress occasions.  These forms of gender transgression are fascinating, because they could be used as a tool both to reinforce and to undermine traditional roles.

For some people, the idea of wearing clothes designed for another gender would have been so outrageous in the everyday that it became something absurd and laughable when used as a ‘costume’. When a man who would not be seen dead in pink decided to wear a flowery bonnet and skirt for a laugh, they deliberately made a mockery of such behaviour. This kind of humour and entertainment was derived (perhaps quite unintentionally) at the expense of people who did not conform to traditional gender roles, and may have served to quash individuals who might otherwise rebel against the gender binary. It reinforced the idea that a man (or a person assigned male at birth) in a dress could only ever be a joke.

It is a concept which has been employed throughout history. Medieval carnivals such as ‘The Feast of Fools’ involved the deliberate upturning of the ‘natural order’ – this included gender crossings and peasants crowned as the kings. However, these festivals served to assert the ‘the folly of inverted roles’. Once the festival was over, everything was expected to return to ‘normal’. As a result, the ‘natural order’ – what behaviour was considered acceptable – became even more clearly demarcated from the unusual or the ‘wrong’.

On the other hand, without these occasions there may have been very little opportunity for people of minority sexualities or genders to explore and express their identities. On occasions which involved fancy dress (such as Meg’s New Year ‘guising’, or the Memorial Hospital party), the upending of conventional gender roles was deemed acceptable, even if only for a short time. It allowed for a ‘playful escape into another gender’.

For transgender or non-binary people, both today and in the past, spaces of gender transgression such as fancy dress (‘guising’) could be opportunities to play around with and upturn conventional roles.3 They could be spaces which gave them a freedom to experiment; to learn about their identities and to discover what gendered performance was most comfortable for them.

‘A brave disguise and a safe one’

The very word ‘guising’ is interesting; it comes from the word ‘disguise’. Individuals, such as Meg and friends, derived entertainment from the ability to hide their identity and take on an entirely new persona. Meg’s note on the back of the postcard reads:

‘this is how we spent New Years’ Eve out guising // we are all home people on here but three if you can make us all out wait untill you see someone from [Blyth?] // Meg’

For many of these revellers, the new persona was the disguise, but for some this new persona could have been an opportunity to express their more authentic self. For them, their everyday outfit and expression may have been the ‘performance’; the gender they presented as on a daily basis was the ‘disguise’.

Without the voices of these individuals, we are left with a sense of ambiguity. We have very little to tell us about these Warwickshire individuals, or their experiences with transgressing the gender binary. However, from the sound of Meg’s briefly scribbled note, it seems like they had fun!

3 They also offered space for gay or bisexual individuals to experiment with different aspects of gender. For example, we know that during Lady Malcolm’s Servants Balls in London became notorious as a space for working class men to wear feminine attire and seek out romantic or sexual encounters. A Metropolitan Police report of 1936 describes the scene: “Officers have reported young men of the effeminate type in coloured silk blouses and tight-hipped trousers, their faces rouged and powdered, dancing in the most objectionable way.”