You are here: Home>Locations>Warwick>The Noble Imp's Armour at Warwick Castle 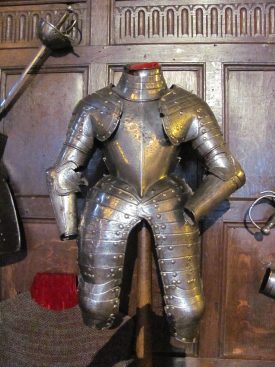 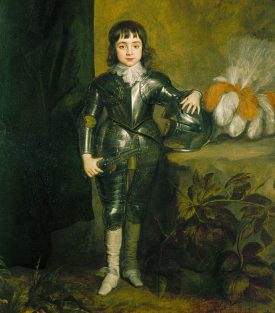 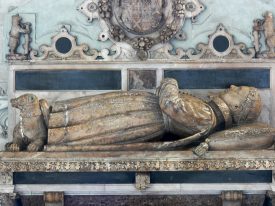 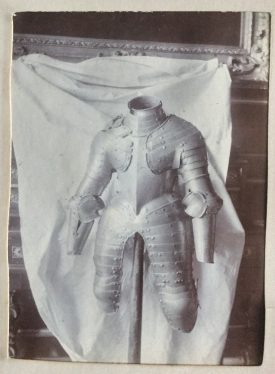 It is always an awkward feeling when research dispels the myth of a much loved local treasure.

On display in the Great Hall of Warwick Castle is a small and delicate armour traditionally associated with Robert Dudley (1581-84), Baron Denbigh.

Lord Denbigh, often called the Noble Imp, was the only legitimate son of his illustrious father the Earl of Leicester. Alas, his son never made it past childhood and died prematurely at the age of three. His sumptuously carved alabaster tomb in St Mary’s Collegiate Church, decorated with the heraldic devices of the Earls of Leicester and Warwick, is testament to his father’s hopes that this boy would have one day become the heir to his family’s legacy. Leicester’s ageing brother Ambrose, Earl of Warwick, had little chances of securing an heir to his own title and estates. The Dudley tombs, positioned within the jewel-like Beauchamp Chapel, reflect their own overarching ambitions as inheritors of the Beauchamp dynasty’s power, fame and fortune. Leicester and Warwick’s effigies show both men dressed in plate armour illustrating the enduring image of the traditional armoured knight.

Although contemporary audiences generally find the prospect of armour for children somewhat bewildering, many high quality armours were made for the sons of emperors, princes and noblemen during the 16th and 17th centuries. Armour, a much misunderstood art form, served a dual purpose. Not only would these protective steel plates proved practical in warfare; they were often used by the elite to project images of power and wealth. An exquisite surviving armour belonging to Leicester, one of the greatest to have been made by the Royal Workshops at Greenwich, is a splendid example of how steel and heraldry could fashion an indestructible image of princely authority.

However, in the case of armour for children the armour becomes a symbol of inherited authority from father to son. Although such small armours may have been worn for parade and courtly spectacles, they would have also become a work of art to reflect the readiness of a child to continue his father’s own conflicts and battles. Although the boy would not have been expected to go out and fight, such a harness may have played an important part in his knightly training and education.

This is where the awkwardness begins. The Noble Imp’s armour at Warwick Castle has one central problem. Its design and form suggests a date of c.1625, and is thus 50 years too late for Lord Denbigh. Indeed, its design relates closely to a complete harness preserved in the Royal Armouries. This specific style of cuirassier armour, which often features the plates finishing off just below the knee, reflects the changes occurring in armour and fashion at the beginning of the 17th century.

It is more likely that the armour’s identification with the Noble Imp may have come at some point during the 19th century, when it entered Warwick Castle Collection. Both the 3rd and 4th Earls collected armour for their historic and romantic associations, all befitting an impressive medieval castle. Amongst their prize pieces were relics such as ‘The Black Prince’s leg armour’ and the ‘Guy of Warwick’s armour’, many of which have since been ousted as Victorian forgeries.

If not the Noble Imp, who may have the child’s armour have belonged to? This rare and important piece, of extremely high quality, would have almost certainly been produced for someone of extraordinary means. Many of the surviving English examples were those that were made for the sons of Kings. Indeed, it is worthy of note that Van Dyck painted the young Charles II in a remarkably similar armour in the 1630s. This wonderful portrait, in which the young Prince holds a rather expensive Wheellock gun, indicates the level of splendour such a piece would have had. Although there is no proof to link the armour with the Prince, perhaps one day some evidence shall emerge to prove otherwise.

Does the sign need changing, or, shall the awkward truth remain a secret between us?