You are here: Home>Locations>Warwick>Oranges and Lemons: Greville Gardens and Portraits, Part One

Oranges and Lemons: Greville Gardens and Portraits, Part One 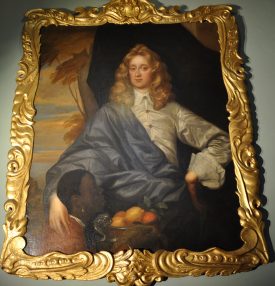 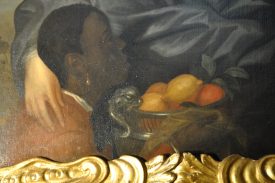 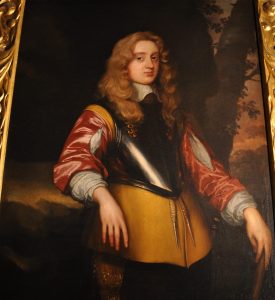 If visiting historic country houses has taught me one thing, it is that you should always carry a torch with you. Delicate fabrics, drawings and materials necessitate low lighting levels; however, a little torch is invaluable to the explorer of the fine details in paintings waiting patiently in dark and overlooked corridors.

In the chapel passage at Warwick Castle hangs one such painting. This narrow vaulted space is lined with many fascinating family portraits of the 17th century Greville family, who bore the title of Baron Brooke since 1621. There are two particular portraits which have always presented a great mystery. They are traditionally believed to depict a father and heir, Robert Greville (1607-1643), 2nd Baron Brooke, and his son Francis (d.1658), 3rd Baron Brooke1.

These pictures have lost their identities over time and have become muddled. The first depicts a young strawberry-blonde gentleman in cuirassier armour, with marshal’s baton in hand, standing in a shady grove. The other depicts a slightly more flamboyant man in a white laced shirt covered in elaborate drapery, standing proudly with his hand on hip. With the aid of some good lighting, it is possible to see that this second gentleman is in fact not alone. Shaded in the embrace of his right arm is a young black servant wearing a pearl earring, dutifully presenting a precious silver basket of oranges and lemons to his master.

It is fair to say that most of us take citrus fruits for granted. We wouldn’t think twice about seeing them in a fruit-bowl in our home or stacked into colourful pyramids in the grocer’s or supermarket. During the 17th century, however, these were luxurious commodities often imported from abroad. One often encounters them in paintings of the period – particularly in still-lifes, where they are placed proudly in opulent displays, surrounded by other items of great value and beauty.

The Grevilles grew oranges in the gardens of their London residences. These rare fruit trees were presumably initially planted by Elizabethan and Jacobean courtier Sir Fulke Greville (1554-1628), 1st Baron Brooke. The famous diarist John Evelyn described the gardens of Brooke House, Hackney, in 1654 as ‘one of the neatest and most celebrated in England’2. Fellow diarist Samuel Pepys in 1660 also remarked in his diaries that in Lord Brooke’s Hackney residence;

…the gardens are excellent; and here I first saw Oranges grow, some green, some half, some quarter and some full ripe on the same tree…

He also confessed that;

I pulled off a little one by stealth (the man being mighty curious of them) and eat it; and it was just as the other little green small oranges are; as big as half the end of my little finger. Here were also great variety of other exoticque
plants and several Labarinths and a pretty aviary.3

These wonderful descriptions may point towards the grandeur of the Greville’s other outstanding gardens at their residences at Brooke House, Holborn, and at Warwick Castle.3a

1 Francis was the son of Robert, 2nd Baron Brooke, and his wife Katherine Russell. Katherine was the daughter of Francis Russell, 4th Earl of Bedford, and sister to William Russell, 1st Duke of Bedford. She brought up her sons in their London residences after the death of her husband Robert. There are two small portraits of Katherine at Warwick Castle and another at Woburn Abbey, the Russell’s ancestral seat.

3a Further details in A. Busiakiewicz, “We scarcely call these things our own – Sir Fulke Greville’s curious collection” due to be published in the Sidney Journal in 2017.