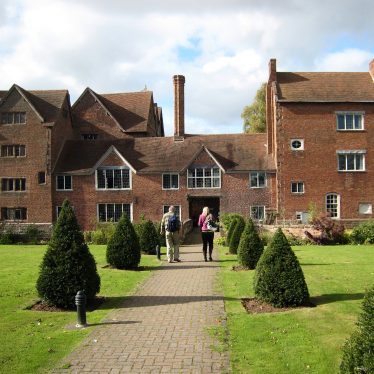 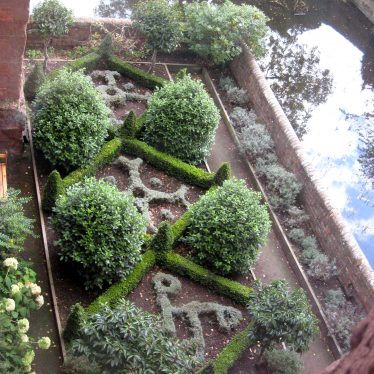 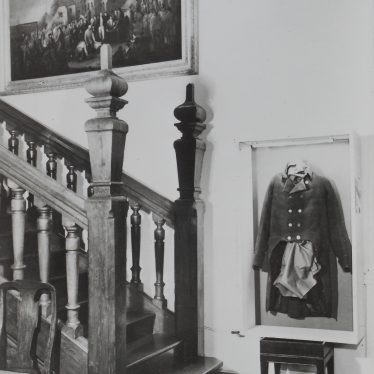 Harvington Hall in Worcestershire is a fine Elizabethan moated manor house that for many years belonged to the Throckmorton family who are based at Coughton Court in Warwickshire. Sir Robert Throckmorton married Mary Yate in 1686 and she inherited Harvington Hall ten years later. I was interested to hear that the main staircase was moved in 1910 from Harvington to Coughton Court, where it can still be seen today (though I’m not sure whether it is the one shown in the attached photo – can anyone confirm this?). Coughton Court is now in the stewardship of the National Trust and is open to the public. Harvington Hall deteriorated in the 20th century and the Throckmortons sold it in 1923. However it’s now in the care of the Roman Catholic Archdiocese of Birmingham, who have restored and opened it to the public.

The patterns in the knot garden at Harvington Hall display the initials of the families associated with it early on: ‘P’ (for the founder Humphrey Pakington), ‘Y’ (for his daughter Lady Mary Yate) and ‘T’ (for the Throckmortons).

Like the Throckmortons, the Pakingtons were Catholic and Harvington Hall is famous for its priest holes: these are ingeniously hidden in various locations under stairs, behind walls and under floorboards. They are thought to have been created in the 1580s by Nicholas Owen, who also worked at Coughton and was later martryed because of his work for recusant families elsewhere. His handiwork at Harvington survived raids by Protestants hunting for priests during the Reformation, and pillage by Parliamentarian forces in 1644. Indeed some of his priest’s holes were so well hidden they were not rediscovered until the 20th century (and indeed more may remain to be found).

Linkedin
More from Coughton
More from Warwickshire unspecified or out of county
More from Farm Houses, Cottages and Manor Houses
More from Castles and Stately Homes
More from Stratford District - Others