You are here: Home>Locations>Warwick>Who is 'Man with Beard'? - A Mysterious Portrait at Warwick Castle

Who is 'Man with Beard'? - A Mysterious Portrait at Warwick Castle 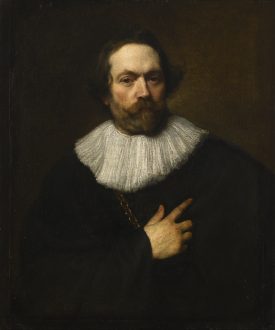 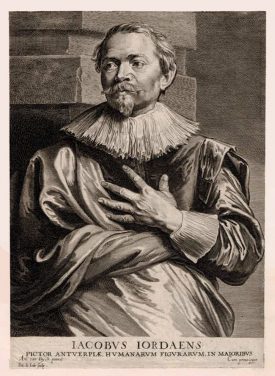 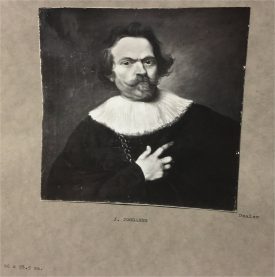 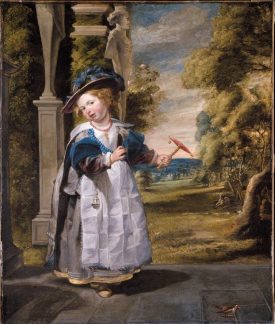 A rather fun news story emerged over the weekend that a three million pound painting by the painter Jacob Jordaens (1593-1678) was rediscovered in the storeroom of Swansea Museum (also see a report on the story here). Jordaens, a contemporary of Rubens and Van Dyck, was considered to be one of the most gifted painters of the Flemish Baroque. This exciting rediscovery was made by art historian Dr Bendor Grosvenor, who recognised that this work was not the 18th century copy the museum had believed it to be.

The identity and authorship of works of art are often details which are lost over time. Bodged restoration, and the obscuring of good quality paint work under centuries of dirt and yellowed varnish, often means that important paintings by celebrated artists end up neglected and forgotten.

Hanging in the corner of the Green Drawing Room at Warwick Castle was one such forgotten painting. The frame of this painting currently bears the identification of ‘Man with Beard’. However, I believe the sitter of this mysterious portrait to in fact be a lost portrait of Jacob Jordaens, artist of the Swansea Museum picture.

This enigmatic portrait was already known to be by the hand of Anthony van Dyck (1599-1641), who knew and worked alongside Jordaens in their native Antwerp. Indeed, both Jordaens, Van Dyck and Rubens would have been working together in the Augustinian Church in the Flemish city around the time that the Warwick Castle portrait was painted. The lively style and execution conforms to what we would expect from Van Dyck between 1628-1632; he would later move to London and become painter to King Charles I. We know that Jordaens was painted at least once by Van Dyck, as his portrait appears in a collection of engravings known as the Iconography.

One fascinating clue to the sitter’s identity is the golden chain worn proudly in the Warwick portrait. Gold chains were often used as a symbol of a gift from a sovereign to a painter. In 1633 Van Dyck painted a self portrait with a sunflower and flaunting a golden chain he received from Charles I. Although there is no record that Jordaens ever received such a gift, this was certainly a time when the artist was experiencing a period of promise and growth, a moment which Van Dyck may have wished to capture. Jordaens did eventually become the successor to both Van Dyck and Rubens in Antwerp, who died in 1641 and 1640 respectively. Although Jordaens produced several self portraits he often portrayed himself as a member of the middle classes; a marked difference from the flattering, elegant, and aristocratic portraits produced by Van Dyck.

Frustratingly, I found new exciting piece of evidence, now exclusive to Our Warwickshire, months after I had this research published in a short article in the British Art Journal.1 After researching in the large photograph collections of the Witt Library in London, I managed to find two copies of the Warwick Castle portrait. Temptingly, one of these copies was with an unknown dealer in the 1970s(?) where it was identified as ‘Jacob Jordaens’. Naturally if this copy had retained its original identification, this makes the case for the Warwick Castle portrait much stronger. Alas, this copy is yet to resurface from a private collection.

Although it may never be possible to prove without doubt that is truly Jacob Jordaens, the mystery is certainly an intriguing one. The painting was probably purchased by George Greville, 2nd Earl of Warwick, who amassed a fine collection of pictures by Flemish artists including Van Dyck and Rubens. Indeed, a portrait of Jordaens’ daughter Anna Catharina was formerly in the castle collection until it was sold by the present Earl Guy Greville, 9th Earl, in 1997 (Sotheby’s, London, 3 July 1997, Lot 91).

Dr Bendor Grosvenor’s new BBC4 TV series Britain’s Lost Masterpieces begins this Wednesday at 21.00pm. Do any readers of Our Warwickshire have a lost masterpiece lurking within their collection?