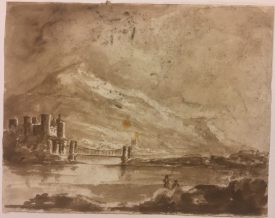 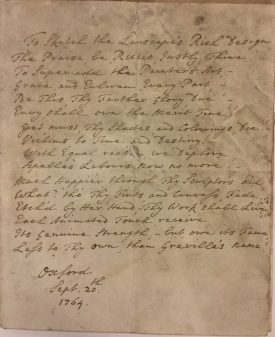 The second Earl was not only a collector of art, but seemed to enjoy participating in the creation of it too. It has been noted that both George and his three siblings took drawing lessons from by Alexander Cozens and Paul Sandby, both important figures in the development of British Watercolours Painting. In Olivia Wilmot Serres’s collection of letters to the Earl, published in 1819, she recorded flatteringly that:

Lord Warwick was an excellent draughtsman, and excelled but by very few, in the modern age, in that art. Several of his lordship’s drawings were shewn by himself to the Editor, when visiting Warwick Castle … who, having since, herself, made a progress in the art, considered the compositions of the Earl of Warwick, in point of colouring and grandeur of design, in no way inferior to the immortal Claude Lorraine, and in every point of light, resembling the spirit and pencil of the most able master.

It would be tempting to think that a loose brown ink watercolour1 of Conwy Castle, Wales, might be in the Earl’s own hand. It is accompanied by a celebratory poem which is dated Sept. 20 1764 Oxford, a mere four days before he is recorded to have matriculated from Christ Church, Oxford.

The appearance of 25 unfinished paintings listed in Guy’s Tower is of remarkable interest, especially considering it was this location which the Earl had offered the fashionable portrait painter George Romney to use as his studio. Whether George might have used the space for himself as a studio, with the unfinished canvases being his own painterly musings, is unknown.

There are many paintings which remain unaccounted for, including the famous Canalettos, which might suggest that part of the collection was kept in their London residence. A London inventory from this period is currently unaccounted for, however it is likely that many family portraits by Romney, Gainsborough, and Reynolds and others were kept in the city.

Amassed a mountain of debts

By the end of the century the Earl had amassed a mountain of debts and his castle and collection was eventually put into the hands of trustees. Although his career has been described as “an example of misguided aristocratic ambition” , his impressive art collection remained largely intact till the beginning of the 20th century. Its most celebrated pieces are now dispersed amongst some of the greatest museums in the world, including the National Portrait Gallery, London; the Frick Collection and Metropolitan Museum of Art collections in New York; and several other important European and American institutions and private collections.