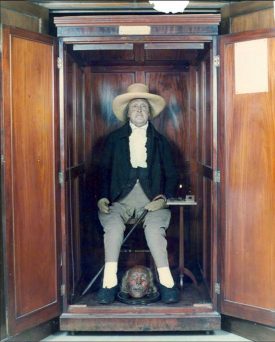 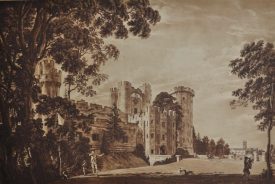 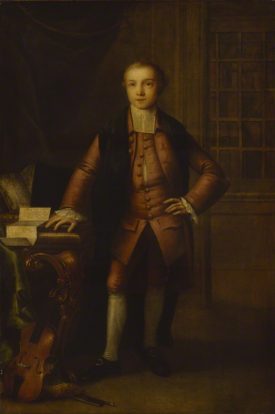 Portrait of Jeremy Bentham by Studio of Thomas Frye, oil on canvas, dated 1760.
Image courtesy of the National Portrait Gallery.

Bentham’s first recorded visit was in late October 1789, when he intended to stay there for three days. A surviving letter to a member of the Vernon family makes it clear his first visit was not a pleasant one. This was due to the loss of a bundle of French papers, that “have none of them never been sent to Warwick with the rest. By this most barbarous of all breaches of faith my credit has been suffering at the Castle, all this long while…”.1 How marvellous to think that Bentham was in contact with French Revolutionaries during his stay at Warwick.

The beauty of the castle, however, must have made an impression on him. He later wrote “No places more proper than old castles for romantic exhibition: but the castle of St Angelo must now yield to that of Warwick. His Holiness has never yet been able to do anything like it…”.2 Fine praise, for when was or has Warwick ever since been compared with any Papal residence?

Another letter, written to a young member of the Greville family, accounts for another visit he made to the Castle possibly in November 1791.3

May it please your ladyship! I am the young man who was taken from behind the screen by my good Lady Warwick, in the room where the pianoforte is in Warwick Castle, to wait upon your sweet person…

Bentham’s musical abilities on the violin were renowned. A violin appears in an early portrait of the philosopher, which now hangs in the National Portrait Gallery. (see image). No doubt their duet may have been one of Johann Christian Bach’s sonatas for piano and violin, an example of which can be sampled here.4

His letter goes on to put himself forward to become Lady Elizabeth Greville’s “musical instructor, or anything else I should be capable of, being turned adrift upon the wide world, and out of place at this time.” How different the family’s fortunes may have been if Jeremy Bentham was to become a tutor to the Greville children at the castle. In any case, it would seem his offers of service were never taken up.

George Greville, 2nd Earl of Warwick, appears to have kept in contact with Bentham. A letter from Lord Warwick survives dated 14 June 1794, expressing his sorrow not to have made it to Parliament in the afternoon.5 Bentham, before having met the Earl, remarked in a letter that “Ld W. he says [Lord Shelburne] is a pleasant good natured little man, and that I shall like him very well: upon my asking about his political bias, he spoke of him with some little mark of regret as being a courtier…”6

Bentham’s legacy is especially felt in the part he played establishing University College London (UCL), the first alternative to the Universities of Oxford and Cambridge. On his death in 1832, and with respect with his wishes, Bentham’s body was publicly dissected. His remains were to be preserved and stored in a wooden cabinet as if alive, where they can still be seen to this day in the South Cloisters at UCL.7

3 Letter from Jeremy Bentham to Lady Elizabeth Greville, dated Sunday 27 November 1791. I have thus far been unable to identify exactly which Greville this may have been. The Electronic Enlightenment project indicates she would have been seven years old.

4 Johann Christian Bach (1735-1782), known as “the London Bach” due to his time spent in the capital, is the most likely of the Bach family to have composed this music.

7 The current head is a waxwork, as his rather macabre preserved head is stored elsewhere.