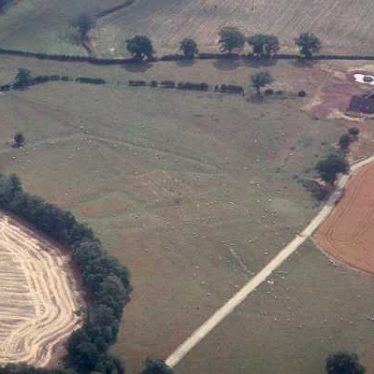 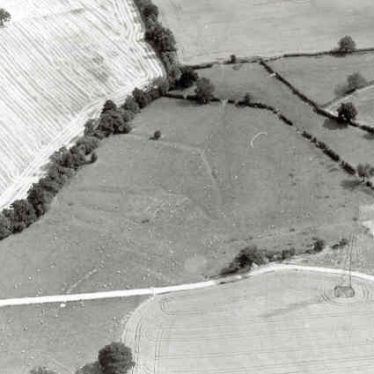 Documentary evidence suggests that this was the site of the Cookhill Priory, comprising a moat and priory buildings. Of Medieval date, the remains of the priory are visible as earthworks. The site is located 350m north west of Morgrove Coppice, Spernall.

2 According to a papal licence of 1400 Spernall was the original site of the Priory of Cookhill and their original buildings here, at that date in ruins, included a church and cemetery a cross-bow shot from the parish church. Cookhill certainly held lands in Spernall, which are described in 1535 as the demesne (terra dominicata) of St Giles. The chapel of St Giles, which may have been the original church of the priory, was granted with other of its lands, to Thomas Broke in 1541 and to Nicholas Fortescue in the following year. It had probably by then been converted into a farmhouse. Later references also occur.
3 Earthworks are visible on air photographs and almost certainly mark the site of the early priory.
5 The priory is said to have been founded by Isabel, countess of Warwick in 1260 but she was probably rebuilding a priory founded before 1198. By 1400 the priory had been moved to Cookhill in Worcestershire and the Spernall priory and its cemetery had been destroyed. By 1547 the priory had been replaced by a farmhouse and this is also refered to in the 17th century. An estate map of 1695 shows the farmhouse standing on the edge of a moated platform. The earthwork features are well preserved. The most prominent feature is a raised platform which may once have been moated. The moat represented by a wide ditched feature is preserved to the S and E of the platform. The platform is about 60m across and bears traces of ridge and furrow. The 16th century house appears from the map evidence to have been substantial. There also appear to be earthworks of a number of additional buildings around the house and these are probably the buildings of the priory.
7 This site has now been scheduled (SAM 21509).
8 Find of a medieval flask in December 1986. The method of recovery was not recorded.
9 Correspondence from 1989-90.
10 Letter to EH from 1988 suggsting scheduling.
11 Correspondence with EH about scheduling.