You are here: Home>Locations>Warwick>Warwick Castle, On Fire! 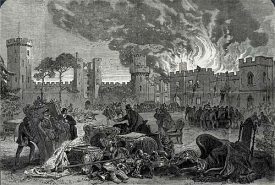 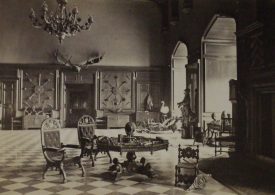 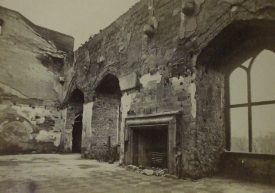 Warwick Castle's Great Hall after the fire.
From an account of the fire at Warwick Castle, with articles and photographs arranged by H.T.Cooke & Son. Warwickshire County Record Office reference PH 595.

3rd December, 1871. A fire tears through Warwick Castle. The Great Hall is destroyed, along with a number of private apartments and offices.

Even in 1871 the castle was a popular place to visit, described by the Leamington Courier as “the central point of attraction in the very heart of England” and by The Times as an “object of universal pilgrimage”. As such, the fire naturally caught the attention of both Warwick and beyond. “Every Englishman, every American, every traveller in the civilised world will hear with profound regret of the destruction of Warwick Castle” was how the Morning News1 pronounced the event. The first knowledge of the fire was when Joe Powell, the Steward’s room boy, heard what he thought was the pattering of hail on the roof. After waking one of the footmen, William Everton, they found the sound they had thought was rain or hail was in fact the molten lead running off the upper roof.

Such was the horror, that the Leamington Courier described the inferno in poetic terms. “The Avon appeared as if it was transformed into molten metal, so strongly did it reflect the fiery glare. It was a solitary spectacle, for the country lay still and quiet beneath a few flakes of December snow.” “Fire,” the Courier gravely observed, “when once it takes hold of an edifice, too generally reduces the work of ages to ashes.”

In the immediate aftermath, there were fears that the damage to the castle was irreparable. Fortunately, this was not the case and, indeed, viewing the castle from the Avon after the flames had been extinguished, it was difficult to see the damage from the outside2 and the external walls were still stable. Furthermore, the blaze did not reach the state apartments. This is not to make light of the fire, however, as the cost to repair the damage was huge. Nonetheless, aided by public subscription, the rooms were restored to their former magnificence. Although the Manchester Guardian offered the apocalyptic vision that “a page of English history has just been destroyed”, the collective efforts to restore the castle instead added to its history, and showed its importance to the town and county beyond simply being a residence for the Earls of Warwick.

This sense of the castle as a building that transcended its owners was seen as Lord Warwick thanked the efforts of those who fought to halt the flames, and save the treasures held within the walls3. Perhaps we might too thank those who helped save and restore the castle, for us to be able to enjoy Warwickshire’s past today.