Then and Now: Astley Castle 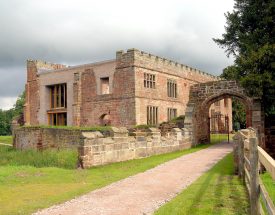 Astley Castle 2014.
Reproduced by kind permission of the Landmark Trust. 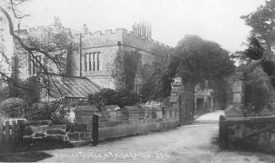 Astley Castle has a rich and varied history. In 1266 Warin de Bassingburn was granted a licence to enclose the manor house at Astley with a dyke and walls, and to crenellate (fortify) the property . By 1674 the castle had been sold to the Newdigate family, and among their records (held at Warwickshire County Record Office), there are a number of references to Astley. These offer up such insights into its history as an 1804 agreement by Sir Roger Newdigate to lease Astley Castle to Mrs Rebecca Hutchins of Chilvers Coton. There is also a glimpse into family life afforded by an inventory of 1893, detailing the household furniture and effects at Astley Castle.

Come the 1960s, Astley was being used as a hotel. In 1978, the castle was subject of a devastating fire, and the record office holds photocopies of photographs held by the National Buildings Record, taken after the fire . Numerous proposals were made to restore the shell, but ultimately the cost proved prohibitive. In 1994, areas of the site were declared a Scheduled Ancient Monument, and a copy of the March 1994 County List of Scheduled Monuments is available for viewing in the record office searchroom. Eventually however, in 2005, the Landmark Trust proposed a solution that involved building accommodation within the ruined walls. The finished building won the RIBA Stirling Prize for Architecture in September 2013.

A shifting sense of permanence

Design at Astley Castle is not restricted to the present day. A building is not set at one point in time but is constantly shifting, constantly developing, and is not in a fixed state of permanence, whatever the sense of ‘age’ is. Combined, these records help to demonstrate the nuances of the past, and how buildings can hold as interesting and varied a history as the people who live within them.

We’d love to hear your memories of the castle, did you visit it when it was a hotel? Perhaps you’ve visited the ‘new’ building on one of the open days, what did you think?