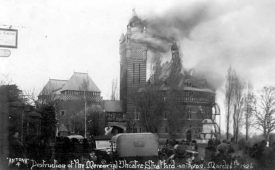 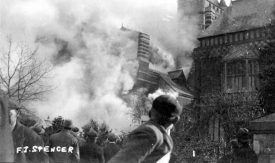 After four years of the Transformation project, the Royal Shakespeare Theatre opened its doors once more in 2010 after substantial redevelopment. Much of the art deco detailing of Elisabeth Scott’s controversial original design survives but the interior has seen dramatic changes, especially the auditorium.

Also included in this project were relatively minor updates to the Swan Theatre, that had opened as a theatre in 1986. This building has led an interesting life, almost as dramatic as the plays it stages. Incorporated by Scott into her design for the main theatre, it served as a conference centre and rehearsal room. This is the life that the building has taken in recent years, after the dramatic events of 1926 when the Shakespeare Memorial theatre caught fire.

Many postcards exist of the fire, and the Warwickshire County Record Office is lucky enough to own many of them. The theatre itself opened in 1879, building on renewed enthusiasm for the Bard that came with the Tercentenary Festival that celebrated the birth of Shakespeare in 1864. The scale of the devastation caused by the fire is clear, and these postcards capture well the moment.