You are here: Home>Locations>Barford>Thunder and Lightning, 1905 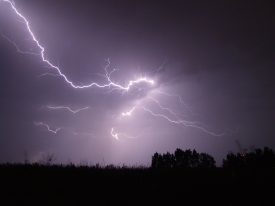 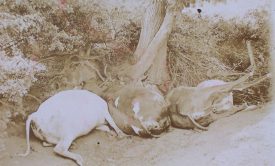 Not an early demo of a Thin Lizzy album, but instead a report into weather of particular savage brutality. On 9th July 1905 a terrible storm swept across the UK. With damage and death sweeping from Llandrindod Wells to Lanarkshire, and from Annaclone to Andover, it was hardly surprising that Warwickshire too got caught up in its wake.

With houses flooded in Coten End, and a beam in the Free Library reading room split in two, the storm was particularly violent. A farmhouse at Bull Oak Farm, Wedgnock Park suffered particularly. The lightning split the chimney in two, then travelled across the roof and entered the kitchen, splitting the lead casing of the pump within. Amazingly, nobody was injured during this event.

Survival of the weakest

Indeed, unlike other parts of the country, Warwickshire appears to have escaped the loss of human life. Cattle were killed, however, in the Woodloes and Barford. A Mr. Cockburn of the Asps suffered particularly. His unfortunate herd of 24 cows suffered an untimely end as the oak tree under which they were sheltering was struck by lightning. It was also an occasion that disproved Darwinian theory of the survival of the fittest – the smallest cows escaped injury as they were prevented by the larger bullocks from sheltering under the tree.

Valued at £200, these cattle were no small loss to Mr. Cockburn, and the cost was compounded by the loss of two lambs and a number of chickens. It may have been little consolation to Mr. Cockburn that his newly deceased cows proved something of an attraction to the locals, with crowds gathering to view them, and many photos being taken.