You are here: Home>Locations>Baginton>Fire at Baginton Hall 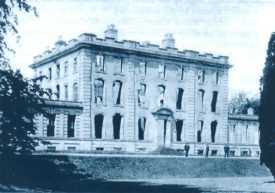 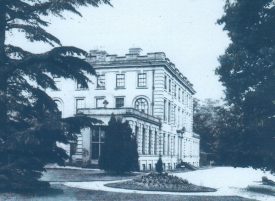 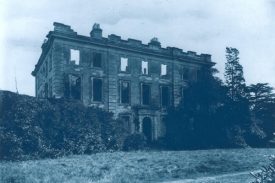 Intelligence was received at Coventry on Monday morning about twenty minutes to eleven that Baginton Hall was on fire. All that the messenger, a groom named Everitt, could say, for he was breathless with hard riding, was that a cask of paraffin had caught fire in the lamp room and that the flames were spreading rapidly. Inspector Wyatt, who was on duty at the police station, telephoned immediately for four horses from Mr. Camwell’s to horse the steam fire engine, and despatched all the available constables to call the members of the Fire Brigade. In about five minutes the steamer was ready to start, and Deputy-Captain Liggins, who had been fetched from a meeting of the Market Hall Committee, took command.

The news of the fire spread quickly, and a number of persons set out on foot for the scene. The Coventry Fire Brigade reached Baginton about five minutes past eleven, and the serious nature of the conflagration was at once seen. It would appear that the petroleum for the use of the entire house is stored in the basement underneath the drawing-room, the cellar being so dark that a light is required when any work is done therein. About ten o’clock on Monday morning one of the men was getting a supply of oil when it caught fire, and the cellar was instantaneously in a blaze. The flames soon broke out from the storeroom windows in the basement, under the breakfast room, at the east front of the building. Already the servants, assisted by the neighbouring farmers, ware busy removing the valuable oil paintings, the grand old furniture, and other treasures. The lawn in front of the house, with its splendid avenue of trees stretching away down parallel with the Bubbenhall Road, was piled with a miscellaneous assortment of goods from the interior of the Hall.

The wind blew in strong gusts, fanning the flames, which spread with fearful rapidity. Up through the floor of the breakfast room, bursting out at the window on the north side of the massive portico, the fire raged and the workers were driven to the south end of the building. Rapidly the fire spread upwards, window after window falling in with loud crashes, and the flames darting out drove the spectators back off the terrace, down the grassy slope to the lawn. The wind blew the flames out from the house in long forked tongues, and the showers of sparks falling on the terrace and lawn compelled a hasty removal of the goods placed there to more distant spots. It was thought that the fire might be restricted to the part of the house where it originated, but this proved impossible.

Meanwhile the interior of the main block was being totally destroyed. Terrific crashes told of the falling in of portions of the roof and stout oak beams, charred to the core, crumbled away like matchwood. Nothing was left of the division walls of the various rooms but the bare red bricks, while outside the stone facing shelled off in large quantities making a near approach absolutely dangerous. The north wing, consisting of the drawing room, was not so badly burnt as the main portion, but here the leaden roof was peeled and warped in all manner of fantastic shapes. It is remarkable how little of the fine timber in the building is left; nothing but a few relics of immense beams are to be seen, and of the grand polished oak staircase not a vestige has survived. The proud motto, “Phoenix resurgent” is nearly hidden by the blackening stains of the smoke. It is only too evident that the fire was one of the most destructive that has occurred for a considerable period in a building of the solidity and massive proportions of the Hall.

This is an abridged version of an article that appeared on the Baginton Village website and is reproduced with their permission. Read the full version here.