You are here: Home>Locations>Coventry>Fire at the Humber

Fire at the Humber 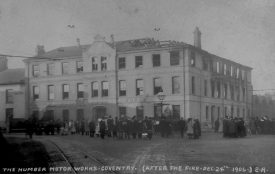 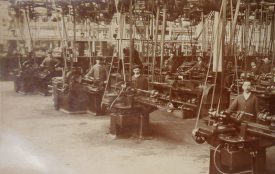 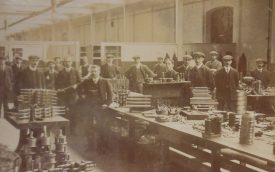 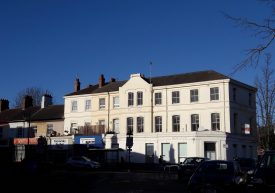 It’s Christmas Eve, 1906. Humber have long had a reputation for their cycles, being pioneers in the field and being renowned for their quality. Having moved into automobile manufacture in 1896 when it is claimed they made the first series production cars in England, they acquired a reputation for high quality vehicles in addition to bikes. In 1906, they would make a profit of £106,500 – a vast sum for the day. Clearly, then, the auxiliary works on Paynes Lane and Far Gosford Street was kept busy – so much so that people were still working at 4pm on Christmas Eve. It is a good job that they were…

At about quarter past four, or maybe a little earlier, a worker headed to find some linseed oil. They smelled burning and raised the alarm. What followed showed the difficulties of the day as despite having a fire hose, they were unable to use enough water to dampen the now burgeoning fire. To call the fire brigade was more of a challenge than it would be nowadays, as the works did not have a telephone! The man who discovered the fire therefore rushed to the Lower Ford Street Works to ask for help.

This could not help stay the fire’s spread, and:

Flames were bursting through the windows on the basement… with great fury the fire spread from one storey to another… the heat for a time was almost overpowering.1

By the time the fire brigade arrived:

the roof was burning, floors had collapsed, and the flames were bursting into the street and reaching along towards the Far Gosford Street end of the factory… through the dismantled roof the sparks shot up a considerable distance and the glare so lit up the sky as to attract notice at the other end of the town.2

Fortunately, the building did not collapse as it threatened to do so, whilst the tram company cut the electric wires to prevent further catastrophe as the fire spread.3 It was also good fortune that most of the completed cars within the building had also been able to be removed.4 Despite this, about 150 car bodies were destroyed, along with 500-700 hides set to trim the cars.5  It says a lot that plans were immediately made to rebuild, and a neighbouring factory was pressed into emergency service in the meantime.6

Christmas Day saw crowds of people coming to see the burning shell of the factory, while 100 men were set to work at the company on that day. It was hoped to get the affected departments back working in some way, shape or form within seven days.7 Bullish claims were also made about the ability to match the production figures of prior to the fire. Given the company managed increased profits yet again in 1907, it appears they managed to do so. Indeed, by 12th March 1908, a new works had been opened at Stoke.

Yet the estimated £20,000 worth of damage was dwarfed by the earlier fire of 17th July 1896 at Lower Ford Street. Humber were not lucky! This 1896 fire caused around £80,000 to £100,000 worth of damage, and saw 3,000 bicycles destroyed8 and meant 600-700 workers lost their jobs. The heat of that fire was so fierce the firemen had to retreat from the front of the building, and concentrate on ensuring the fire did not spread to other buildings.9

Similarities between the two fires are striking. The earlier fire was also at a busy period for the company, so much so that work had finished at 9pm the day before the fire, whilst a lack of water also meant a fire that possibly could have been controlled ended up spreading with terrible consequences. Captain Armishaw of the Fire Brigade urged other companies to call for their help as soon as possible, rather than risk large fires such as this in the future.10 It is maybe testament to the strength of Humber as a company that it was able to recover from two such disasters within a decade.

Humber sold its bicycle trade marks to Raleigh in 1932, after seeing Rootes acquire a majority shareholding in 1931. A favourite with the Royal Family and other notable public figures, Humber were victims of Rootes’ financial troubles in the late 1960s, and disappeared as a marque in 1976, when the cars were badged as Chryslers after rationalisation. The Humber works still stand to this day, although the rear section has been removed.