You are here: Home>Locations>Bidford on Avon>Romano British Farmstead at Bidford Grange 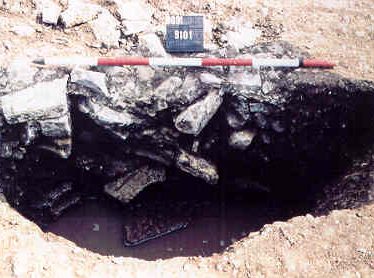 The site of a Roman settlement. During partial excavation of the site, enclosures, ditches, houses and a possible corn drying kiln were found. The site was located 1km east of Bidford on Avon.

2 Possible ring ditch or enclosure, other enclosures and linear features show on air photographs. Some of these marks are probably natural. The crop marks are impossible to plot because of a lack of reference points.
3 The cropmark features were evaluated and then partially excavated in 1991 in advance of the construction of a golf course. Trial trenches revealed the presence of a series of enclosures, possible round houses, possible rectilinear buildings, a well and a possible corndrying/malting oven. The coins and pottery indicate that the site was occupied from the late 1st century to the 4th century, with the main period of occupation in the 2nd century (see report in FI file).