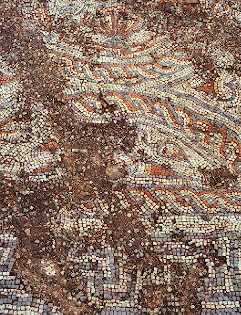 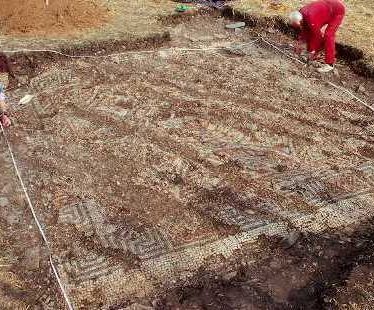 A quantity of Roman material including fragments of pottery, mortaria and box flue tile, was recoved from a field to the south of Newborough Farm, Pillerton Priors. The finds suggest that this might be the site of a Roman villa.

1 In Spring 2002 a quantity of Roman material was recovered from a field to the south of Newborough Farm. The material indicates that this may be the location of a Roman villa. Following the identification of the presence of a possible mosaic, some initial recording work was carried out in these fields. The excavated mosaic was decorated with a swastika type border in grey/blue and white with a roundel having a ropework type design enclosing an urn containing flowers? In red, blue, cream and white.
2 Plot of resistivity survey and reference to find of mosaic.
3 Plot of finds recorded from field walking.
4 Series of plots from magnetometry carried out in 2002/2003. Also included are a number of plots of finds recorded from fieldwalking, as in 3.
5 Site featured in Stratascan’s newsletter. It is suggested here that the anomalies recorded by the magnetometry relate to an extensive settlement site in the environs of the villa, possibly Bronze Age to Romano-British.
6The site is reported on in the Bulletin of the Association for Roman Archaeology, with a particular focus on the excavation and recording of the mosaic, undertaken in September 2002. Resistance survey was carried out following fieldwalking; an aisled villa was identified. The plan of the villa appears to be that of an aisled house on a north-south axis with a wing liked to the north-east corner forming a reverse L-shape. The location to be excavated was chosen to correspond with a consecrated scatter of tesserae located during the fieldwalking. Intact mosaic flooring was found immediately underlying the ploughsoil. The design of the mosaic is based on a crater (wine mixing bowl) and can be related to the Corinium school of mosaicists. An interlocking Greek key design forms the border, and is interrupted by two inset panels of guilloche along each side. The mosaic floored room appears to lie between a corridor to the south and a series of small rooms to the north which may indicate a suite of baths.
7 A series of plans showing the location of the mosaic at Nolands Farm.