You are here: Home>Locations>Stoneleigh>Church of St Mary, Stoneleigh 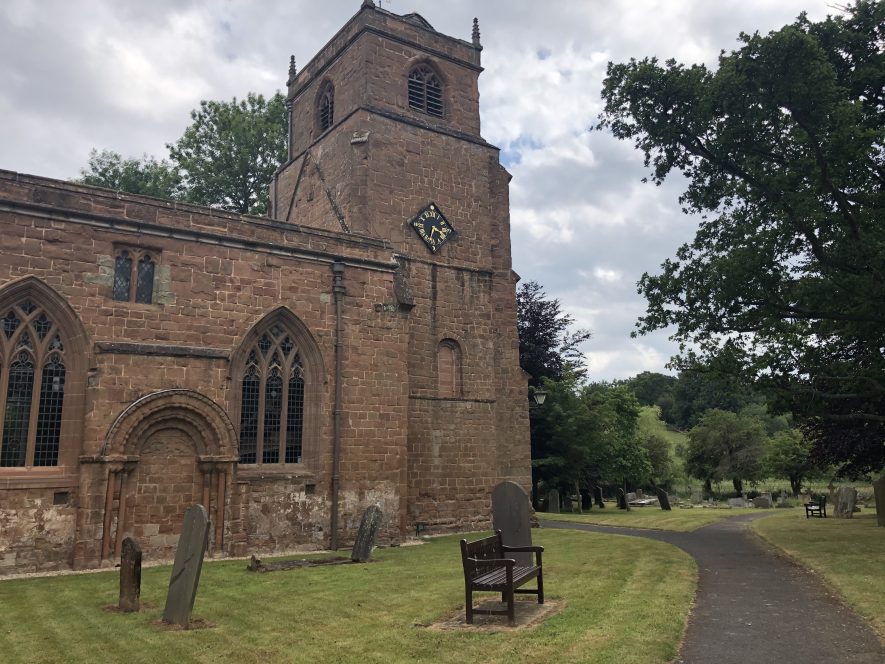 The Church of St Mary was originally built during the Medieval period. Alterations were made to the building later and some parts were rebuilt. The church is situated off Church Lane, Stoneleigh.

1 Chancel, N chapel, vestry, nave, S aisle, and W tower. Of red sandstone ashlar. Dates from latter part of 12th century, when it consisted of chancel, nave, and W tower. Drastically rebuilt and the S aisle added about the middle of the 14th century. Vestry built in 1665 as a burial vault for the Leigh family and a vestry for the parishioners. N chapel built in early 19th century as a Leigh family mausoleum, but is now in general use as a chapel. S aisle wall was entirely rebuilt early in the 19th century and the S porch destroyed. The 12th century tower forms a W porch; the upper stages are 14th century. There were two priests at Stoneleigh in 1086.
2 Plan of the church.
3 Drawing of c1820 and photograph of the interior.
5 Essentially the church is Norman and very ambitious for its date. Norman font from Maxstoke. Two monuments, one probably 14th century, the other 15th century. Early 19th century furnishings.
7 Noted by Ordnance Survey.
8Mural painting from the church discovered in 1822 during repairs to south aisle – ?Martyrdom of St Thomas, St Chistopher, Time and Death and scriptural passages. These disappeared by 1918. Further wall paintings were observed in 1952 in east wall of south aisle, and 1969 in the chancel arch (including the lower part of a Doom).
Murals depicting part of a text in a lion footed frame a (?) lion’s head over looped drapery and a further fragment of on a lower layer of plaster were discovered in May 2003 by conservators repairing the Dudley Monument. The paintings were situated in the north chancel wall behind the monument.
9 Archaeological recording of the interior of the north wall of the chancel was undertaken during the conservation of a large 17th century monument. A blocked 12th century window was revealed along with an adjacent area of walling with a pattern of joints painted onto it. Several elements of in-situ 12th century blind arcading were also discovered. A medieval effigy and tomb recess were revealed. A number of reused medieval floor tiles, including a single patterned example, were found within the base of the 17th century monument. The removal of this monument also exposed an area of wall painting, probably 16thg century in date. A small area of earlier, probably medieval, wall painting was visible under the 16th century scheme.
10 Observation during the replacement of decayed joists beneath the pews recorded part of the sandstone foundation wall of the original south wall of the nave, probably dating to the 12th century. It was located between the piers of the present south aisle arcade. This wall was overlain by the remains of a very worn medieval tiled floor still in situ. With occasional areas of mortar bedding for the same floor, and numerous loose tiles including several patterned examples were recovered. A small area of flagstones and a rough sandstone wall may have been associated with a later flooring scheme. Fragments of painted medieval glass were also found.
11 Observation within church yard and a small trench within church. A stone tomb was recorded against the south wall of the church, with some fragments of medieval floor tile and window glass. Pottery dating to the 13th/14th century and the post-medieval period was found. Within the church, an offset foundation which may have belonged to the original 14th-century wall of the south aisle was uncovered. The side of a blocked doorway in the 19th-century south wall was also exposed.
12 Correspondence relating to 8.
13 Photographs of the murals.
14 Church guide.