You are here: Home>Locations>Kingsbury>Kingsbury Church 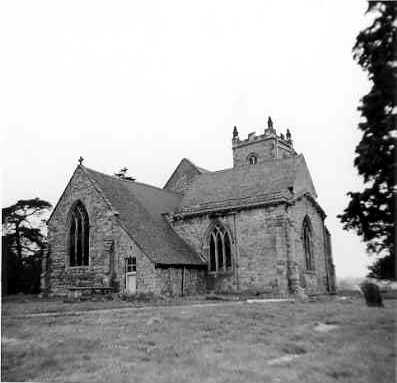 The Parish Church of St Peter and St Paul was built during the Medieval period. Minor alterations have been made to the building up until modern times. The church is situated 100m south east of Kingsbury Hall.

1 Church consists of chancel, former N vestry, N chapel, nave, N and S aisles, S porch and W tower. Probably originally an aisleless nave with a square chancel; remains of one window survive in chancel. Mid 12th century N and S aisles were added and altered in 13th century, when a W tower was added. In the 14th century the chancel was doubled in length, the Bracebridge chapel built to the N and both aisles widened. N vestry added in late 14th century and minor alterations from 15th century to 20th century.
2 In 1945 Chatwin noted a wall painting on the E wall of the chancel.
3 Architectural description of the church.
4 Photograph.
5 17th century W wall of tower rebuilt. ? 2 Norman window scars in E wall of chancel. Heating ducts E end of nave. Internal graves – slabs in sanctuary and W part of chancel, and N aisle. 13th century knight effigy, not in situ. Vault below N chapel. External drains – whole exterior. Kingsbury hall to N. Possible earthworks in field to N of graveyard fence. Probably good survival of below-floor deposits in nave. Rest of church interior may be heavily disturbed by graves.
6 Wall painting on the east wall of the chancel concealed by the ceiling. Described in 1907 as Christ on the throne of majesty and apparently still visible in 1997. Thought to be 14th century in style.