Obelisk in Compton Verney grounds to south-east of house 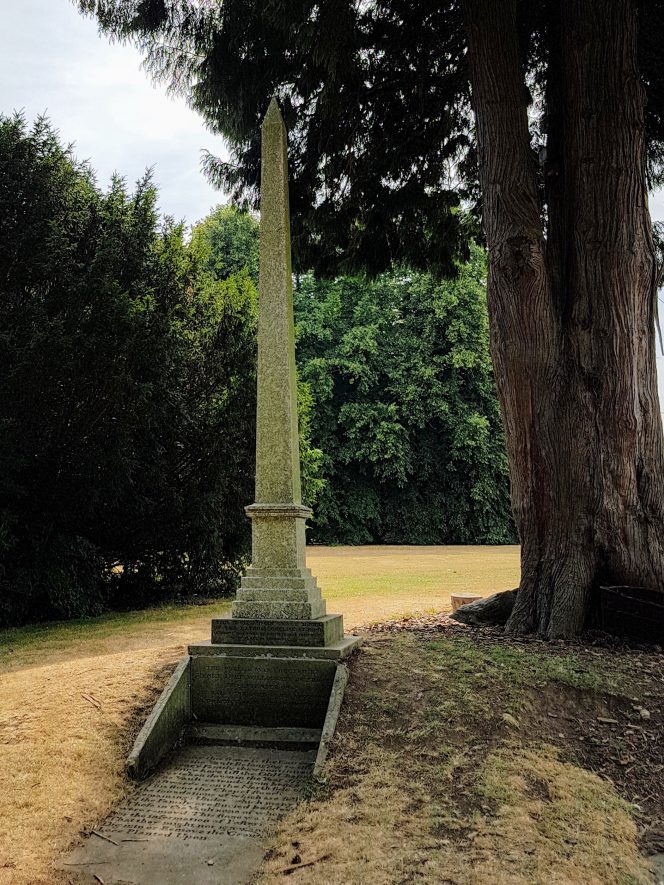 Obelisk dating from 1848 located in the grounds of Compton Verney approximately 45 metres south-east of the house towards the lake.

1 Listed building Grade II. Obelisk . 1848 with earlier work. Cornish granite on ashlar
slabs. 2 ashlar slabs cap entrance to vault; granite plinth on 4 steps to obelisk, described in inscription as a replica of that at the Lateran in Rome. Inscription also records its erection to mark the site of the vault and graves of the Verney family on the site of the old church which was demolished in 1772 during ‘Capability’ Brown’s landscaping of the park.
2 Obelisk marks the site of the original family medieval chapel. A stone slab in front of the obelisk bears an inscription (quoted in full on page 27) referring to it marking the entrance to the Verney Famiy Vault which was in use until the old chapel was taken down in 1772. A basal inscription on the obelisk reads: “This obelisk is an exact model of the Lateran obelisk at Rome. The granite was given by Joseph Thomas Teffry Esq of Place in Cornwall”. Colour photograph of the obelisk on page 27. Page 28 refers to a framed drawing (with an inscription on the reverse by Willoughby de Broke) which is held in Shakespeare Birthplace Trust Records Office.

Linkedin
More from Compton Verney
More from Monuments and Memorials