You are here: Home>Locations>Coventry>Walter Kimberley Gets Taken Prisoner in World War One

Walter Kimberley Gets Taken Prisoner in World War One 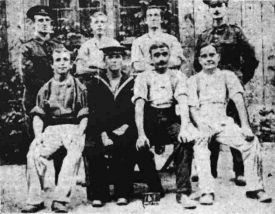 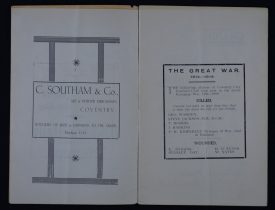 Walter’s wartime fighting experience was brief. It was merely months into the war, when he was taken prisoner on 9th September 1914 at Maubeuge, after the French surrendered. He had been a flanker with a British detachment, but had ‘got lost altogether’. Walter’s determination was evident, as in trying to reach Beauvais he had fallen on the road, wringing wet; he was also suffering with dysentery. He was taken back to Maubeuge in a French cart, where he remained in hospital for a few days before returning back to barracks and back to the action in Asvert.

It was during this action that the ammunition ran out, and when firing ceased a shout went out to “run for it”. The desperation of their plight became clear, as Captain Fitzgerald told his men to scatter and do the best for themselves. The next day Walter made his way past Haumont where he saw the white flag hoisted; unfortunately after about 15 miles he was found by a French Officer and taken back to Maubeuge where he was handed over to the 12th Lancers. They, however, were now prisoners after the French surrender. Walter, along with the other prisoners were then marched from Asvert to Mons under German guard. As if this was not enough, during the march the men were continually hit with sticks, apples, stones and bricks by the German soldiers; they had little or no food and slept in the open fields.

What few bits of comfort Walter had left to him were also taken away. By Mons station, Walter had been relinquished of his top coat. From here, Walter left by train (a cattle truck) bound for Doberitz Camp, Germany. He arrived on 15th September 1914; the journey had taken 4 days, with no food and little water. On arrival the POWs were made to sleep in tents – 300 to 400 men in each tent. They got very cold; they had no overcoats and only one blanket was supplied for each man. Worse, the men were chased out of their tents by bayonets each morning, clearly not a relaxing experience! Kimberley also recounts how some men were tied to a pole for four or five hours at a spell. Despite this treatment, a refrain throughout Kimberley’s account when speaking of the commanders at the camp is ‘I have nothing against them personally.’

Eventually the POWs were moved into huts. This was an improvement; Walter was glad of the stove for warmth, and washrooms that improved the sanitation issues of his earlier journey.

The food got worse

Unfortunately the food did not improve, it got worse. half a loaf of bread a day dwindled to a fifth, there was coffee in the morning and soup mid-morning, which in Walters words “was not fit for pigs’, being simply dirty water with a few potatoes in it. But they drank it, otherwise they would have starved.

Despite the conditions, there were still echoes of his pre-war life in camp, which must have brought comfort to somebody like Walter with a sporting pedigree. Although life in camp was tough, they were allowed to play football and cricket, there was a makeshift church for services, which was also used as a theatre. Letters and food parcels arrived from home which must have been a real boost in morale. Walter’s future, however, was bleak.

See here for a brief introduction to Walter’s life pre-war.

Walter’s experiences as a PoW are now available on find my past.