You are here: Home>Locations>Southam>William Grassam's Life Before and During World War One

William Grassam's Life Before and During World War One

An extract from Southam School's log book on the day that William began his tenure as Headmaster, 12th January 1915
Image courtesy of Southam Heritage Collection 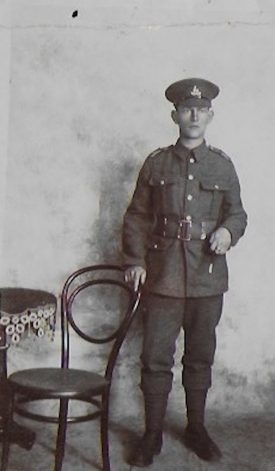 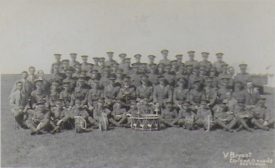 William's regiment photo. He is seated behind the 2nd small drum on the right.
Image courtesy of Anne Kish

William Henry Grassam was a headteacher in Warwickshire schools, including Southam and Bedworth, between 1915 and 1955.  He was also an active member of the community.  He married A.M. Hammond on December 31st 1914. Their three children and other members of his family have helped to tell William’s story by providing photographs and transcriptions of his diary.

William was born on November 1st 1891 in Wolverhampton and trained to be a teacher at St. John’s Training College for male students in Battersea. At his school, Spalding Grammar, William was very athletic, breaking the School record for the 100 yards. However, at 16 years old he records in his diary that he had to give up field events on the advice of his doctor.  This may have been because of his ‘athlete’s heart’, for which he was later declared unfit to serve in the army.

He became Headmaster of Southam School in 1915 and was also a Scout leader;  a local newspaper report of the time gave enthusiastic details of a camp which William led in August 1917.

When war broke out William reports that he twice volunteered for, and was rejected by, the Army on the grounds of poor eye sight and ‘athlete’s heart’. However, it appears that the Army changed its criteria, as he was called up in 1916.  Although he appealed for an ‘indefinite temporary exemption’ on the grounds that “I am a Headmaster and … secretary of Southam War Savings Association and treasurer of the Schools’ War Savings Association”, he was eventually called to fight.

William was one of a number of teachers who had to give up their posts to fight the war. The Warwickshire Advertiser and the Leamington Gazette reported in 1919 that 125 male Warwickshire teachers joined the Forces of whom 14 were killed and 23 wounded.

William wrote that he “was sent to France to join the 2nd Battalion Royal Warwickshire Regiment which was resting and re-equipping. Went to Italy with the 7th Division as a 1st Class Signaller and remained with that Division until the end of the final action of crossing the Pieve River. Was ‘blown up’ on the Montana Front, and later contracted ‘ICT’ feet through the forced marching and wading in connection with the last action.”1  He was sent to a USA Field Hospital by Ambulance Train, and from there to a Casualty Clearing Hospital. He was described as convalescent and discharged on Christmas Day 1918.

He was finally demobilised in February 1919 and again took up his post at school but his diary offers a simple but powerful phrase which demonstrates that his battles did not end at the Front.  He said, “Before many weeks were over ‘I broke’ and spent a total of about nineteen months in various hospitals”.  He suffered with what might now be considered as depression or Post Traumatic Stress Disorder, but this did not prevent him from giving considerable service to the community afterwards.

1 Inflammation of Connective Tissue was a catch-all diagnosis which covered many ailments of the feet, including chillblains, tendonitis or a sprain.  Given William’s description, his ICT could have been chillblains or the early stages of trenchfoot.