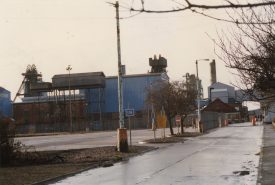 The first Warwickshire Coal Company was registered in 1901 by the proprietors of the Wyken Collieries, who commenced trial excavations at Keresley during 1902 and soon discovered a viable seam. The sinking of a new mine was sanctioned, but not started due to economic problems.

Sinking of the shafts

A new company with the same name was formed in 1911 to acquire the business interests of the previous company and two shafts were sunk at Keresley. The construction of the new colliery was delayed by the First World War and the mine was not completed until 1919. Originally the colliery had its own branch from the Coventry Canal, but in 1919 with the return of the men from the War, production increased, and a railway line was constructed.

The colliery built a village for its workers in 1932, with the 350 new homes housing roughly 30% of the colliery’s workforce. After the colliery was nationalised in 1947, a further 494 houses were built, and an omnibus service was provided for workers who preferred to live in the nearby towns and villages.

In the early 1960s, the National Coal Board (NCB) started the development of Coventry Homefire Plant, a smokeless coal plant located on the colliery site. The Homefire Plant began production in 1967, eventually closing in 2000. A prototype had been built at Birch Coppice Colliery to develop the most economic process for creating smokeless fuel, which was closed and dismantled when the new Coventry Plant was constructed.

Coventry Colliery’s output fell during the 1980s and the mine encountered a series of problems due to underground heatings, and one of its coalfaces encountered a geological washout. By 1983, the colliery was limited to working only one coalface, which could not produce enough coal to cover the colliery’s costs. The following year saw the miners’ strike against pit closures. Support for the strike was divided at Coventry Colliery, and some mineworkers continued to work throughout.

In 1991 the colliery failed to achieve the target set by the NCB and closed for redevelopment. The colliery was later reopened by its new owners, Coal Investments, following the privatisation of the coal industry. Despite a new investment of £20 million, the colliery did not meet its target and further investment was considered inappropriate. Coventry Colliery finally closed permanently in 1996.