You are here: Home>Locations>Coventry>Getting Tickets for Coventry City's 1987 Cup Final 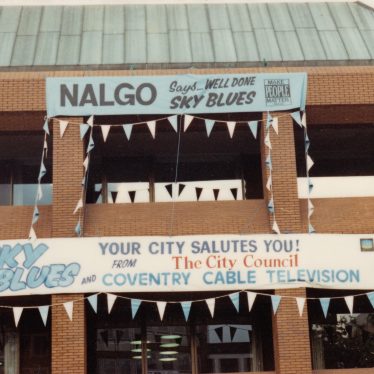 Coventry City Centre decked out in Sky Blue before the game, 1987.
Image courtesy of Caroline Sampson 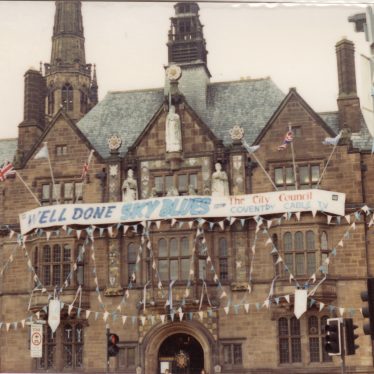 Coventry's Council House got in on the act, 1987.
Image courtesy of Caroline Sampson 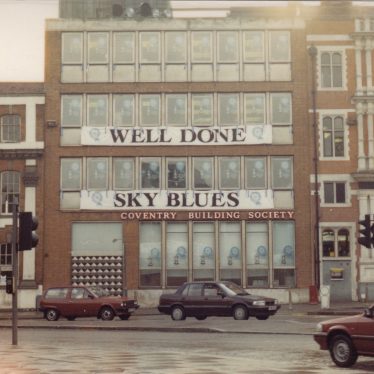 We’d gone to games during the cup run, but we still needed tickets for the cup final; this was planned like a military operation. We had enough stubs for the core five of us – me, Chris, Dad, Uncle Graham and And, but the predictions about the mayhem down at the ticket office meant that Dad and Uncle Graham joined the growing queue two nights before they were due to go on sale. Chris and I couldn’t because we were away at University. I have a memory that And rocked up briefly, didn’t like the look of the overnight camping lark and left Dad and Uncle Graham to it!

A party atmosphere and general mayhem

City actually released the tickets 24 hours early if I remember rightly because the tents, party atmosphere and general mayhem were threatening to get out of control. They got the five tickets with a couple of stubs left over, and my lovely Dad gave the spare stubs to a kid who hadn’t quite got enough. He thought Christmas had come early because even ticket stubs were being sold that day.

I love the story about how we got the remaining three tickets we needed. Dad worked for a firm that had a box at Villa Park. Not something you would normally brag about, obviously, but it meant that his firm had connections with Villa and he was able to get three tickets from their allocation. That was it. We were set to go.

Before the cup final – insanity!

Coming back to Coventry before the cup final was insane. Everyone decorated their houses to within an inch of their lives, even people who didn’t normally talk about football at all. Everywhere was blue. The night before Wembley, we went into the city centre to look at the banners and flags. The thing I remember best was that the water in the fountains was blue. It was unbelievable. The sense of anticipation was awesome. I am vibrating in my seat now just thinking about it!

And there was still the game to come…