You are here: Home>Locations>Warwick>Anthony Eden and the Battle of the Somme

Anthony Eden and the Battle of the Somme 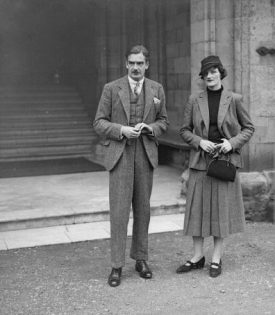 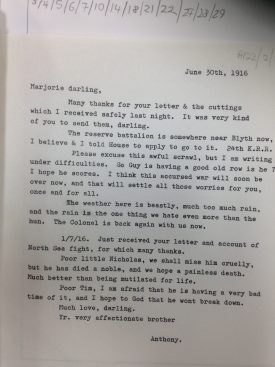 “I think this accursed war will soon be over now, and that will settle all those worries for you, once and for all.” This was a line written by 19 year old Captain Anthony Eden to his sister, Majorie, Lady Brooke, who was resident at Warwick Castle. Eden was reassuring his sister who worried desperately about her husband, Lord Brooke’s continual struggles with his Canadian Regiment and his blatant disagreed for danger.

The letter was written on the 30th June 1916. The next day, Europe descended into consummate hell. Within 24 hours, over 60,000 soldiers had died and over the next four months, over one million soldiers would die on a single battlefield.

Eden’s war letters, written to his sister, Marjorie, Lady Brooke of Warwick Castle, reveal important insights into the impact of the battle on an aristocrat. Unlike many of his class, Eden did not join the battle straight away. He was kept in the reserve lines miles behind the fighting (it is likely the regiment Colonel, his sister’s brother-in-law the Earl of Feversham, had kept him back at the request of the Eden family). His distance from the massacre is identified from his letter in mid-July when he reflects on his family’s estate signing off with ‘all is well here, and I am keeping very fit.’

But death was only round the corner and, unlike many battles in the war, the Battle of the Somme would have a detrimental effect on all soldiers who passed through the trenches. By October 11th 1916, Eden wrote home to his sister:

We are out thank God! Poor Preston was wounded but not badly. One or two officers badly wounded, one died of wounds. We have had a pretty hellish time I can tell you and I was never so glad to get away from anywhere. I am nearly dead beat! I am quite whole, but absolutely done.

A different understanding of the war

The Battle of the Somme, Eden’s first major encounter of the war, would usher in a different understanding of the war. Eden, who had joined the war as part of an aristocratic ‘noble cause’ soon retreated into fits of rage, angry, and brutality through his writing to express the horrors of his experiences.

Aaron Manning has been researching the war letters of Sir Anthony Eden in detail and understanding his experience as a case study of the wider aristocratic experience of the First World War. To book a lecture or talk discovering the secrets and stories of Anthony Eden’s war experience told through his letters, book via warwickhistorian@gmail.com