Football and More at Stretton on Dunsmore 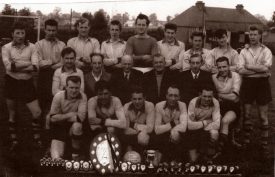 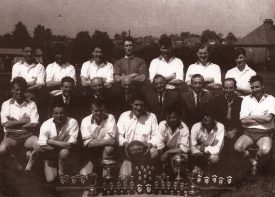 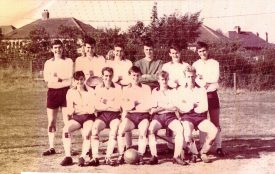 These were halcyon days of playing football and cricket, but one special event was the school entering a team for the Rugby and District Junior School relays, not an event we were even expected to be placed as we were going to be up against much larger junior schools from the area. Our team consisted of Alan Smith, Bill Atkins, John Lomas, and myself. We won, which gave our new headmaster Tom Gullick a lot of pride and pleasure. Tom Gullick was very keen on sport, something the school had not previously done, and we entered into football and cricket matches against other local junior schools at Wolston, Ryton, and Dunchurch. It was a fun time, a happy time, and very rewarding. I made lots of other friends at Stretton including Roger(Jet) Whittle who lived in Rugby Lane and was the nephew of  Sir Frank Whittle, inventor of the Jet engine.

Keeping links with the village

Then the time came for some of us to part as we went on our way to senior school. I went to Wolston High, but others went to The Harris and Lawrence Sheriff in Rugby. By that time I was a member of the choir at All Saints Church which was run by the Reverend William Squires and I attended choir practice on a Wednesday and services on Sunday morning and evening with Sunday school in the afternoon. I also started to attend Stretton Youth Club which I think was on a Tuesday and was run by John (Sammy) Hammond, a chance to enjoy an evening of varied entertainment and music ( after all this was the start of the ’60s).

I also started to go and watch the local team Stretton Athletic Football Club, which had its base at the Oak and Black Dog.. The village team had a lot of support from many within and outside of the village playing in the Leamington and District Saturday League, and built up a very good reputation as a village team to be with excellent quality players and management. At that time the manager was Ron Healey who was well known in the village, and the team proved to be very successful under his leadership in the years to follow.

Local players I can remember include Mick Burden, Terry and Keith Blundell, Frank Lewin, Steve Turvey, Martin Hobday, Ray Windsor, David Dobson, and Roy Hammond – with others coming in from around the outer district.

Linkedin
More from Stretton on Dunsmore
More from Football