You are here: Home>Locations>Nuneaton>Nuneaton Town: The Nearly Men! 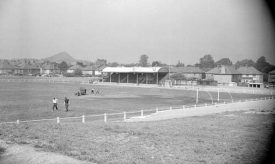 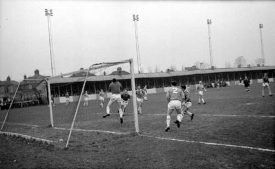 Nuneaton Town are at the time of writing riding high in the Football Conference, narrowly outside the play-off places, close to a coveted place in the Football League. A poor run recently suggests the holy grail of league membership will have to wait for another season, to add to a long list of narrow misses for the senior football club in Nuneaton over the years.

One club or many clubs?

The history of the club currently known as Nuneaton Town can be traced back to 1889, when Nuneaton St. Nicholas were founded. Changing their name to Nuneaton Town, this club made two attempts to enter the league, in the days when clubs put themselves forward for election by its members. After the club folded in 1937, Nuneaton Borough were rapidly formed to take their place. This club made three attempts for election to the league, the last in 1976, while further memorable seasons followed, including two runners’ up positions in the Conference in 1983-84 and 1984-85. Under the present system, this would be more than enough to qualify them for a play-off game, but it was Borough’s misfortune that this success came just before the system was changed yet again. By this point, unlike earlier seasons, election campaigns were fought only by the winner of the Conference.

Financial trials and tribulations have never been far away from the Borough; a period of uncertainty eventually led to the liquidation of Borough, and the formation of Nuneaton Town in 2008. This saw the return of the name from the pre-war years and sees the club, once again, playing at the highest level of non league football.