You are here: Home>Locations>Warwick>Lutes in Shakespeare 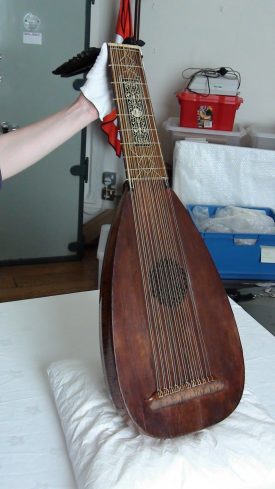 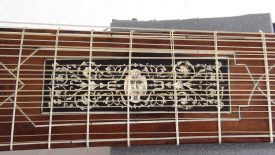 Detail of fret board
Image courtesy of Warwickshire Museum

A rare, 16th century Hans Frei lute is held in the Market Hall Museum collections, and whilst this lute did not arrive in Warwickshire until the 20th century, the lute as an instrument was highly fashionable throughout Elizabethan England and makes a number of appearances in Shakespeare’s works. The Hans Frei lute on display was created in Bologna in the 16th century, and endured its 17th century popularity before making its way to Warwickshire much later on in its lifetime. This lute, amongst others used during this period, proved a popular reference and symbol throughout Shakespeare’s plays and sonnets.

The lute appears in a number of Shakespeare’s works including Much Ado About Nothing, Richard III, The Taming of the Shrew, Henry V, Henry IV, Hamlet, Love’s Labours Lost, and Two Gentlemen of Verona. Notably, they are rarely played as part of the performances, but instead hold a symbolic function as double entendre or extended metaphors. Some examples are:

“He capers nimbly in a lady’s chamber

To the lascivious pleasing of a lute” – Richard III, Act 1, Scene 1

“I understand thy kisses and thou mine,

And that’s a feeling disputation;

But I will never be a truant, love,

Till I have learned thy language; for thy tongue

Sung by a fair queen in a summer’s bower,

“When I like your favor, for God defend the lute should be

Shakespeare believed that the sound of the lute had the power to transport the listener into a form of ecstasy, and represented the magic and power of music. Seemingly, the sound of the lute had a power over Elizabethan audiences, a powerful force over their spirit; a form of musical healing. The lute’s power and influence over the human mind was perceived as particularly strong, with its ability to alter moods and passions, however, this power was occasionally deemed dangerous as it encouraged unnatural behaviours. The lute frequently came to symbolise love and romance, lust and lasciviousness. Its delicate and fleeting sounds also reflected love’s transience. The lute was also used as a metaphor for beauty and flirtation, however, if played in a certain fashion could represent an unrequited love and its accompanying misery and sadness. The contrast between the beauty of the lute against the plainness of its case was also employed by Shakespeare to reflect the conflict between the inner self and the public image.

What emotions do you feel when you see or hear the lute?