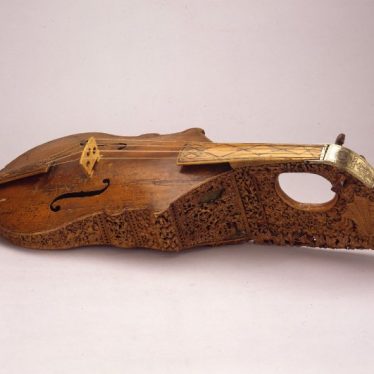 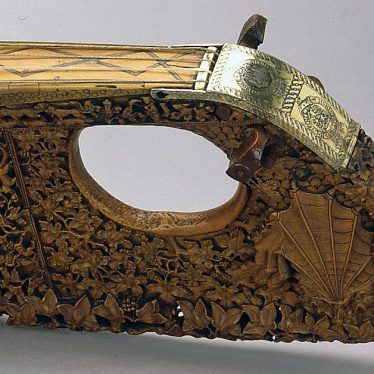 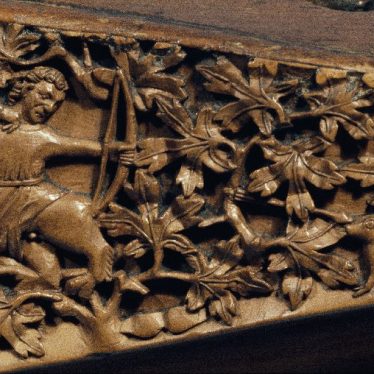 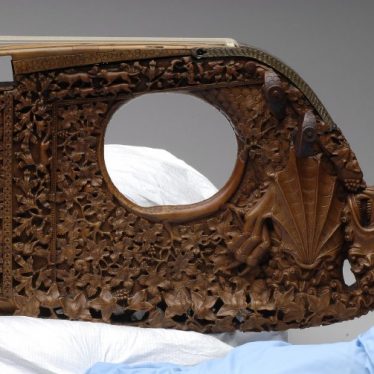 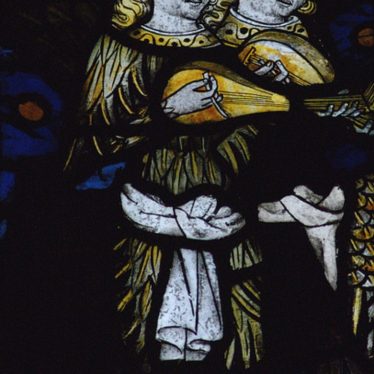 Until 50 or 60 years ago, Warwick was home to one of the best preserved English medieval wooden instruments surviving in modern times. The ‘Warwick Gittern’, whose main body dates to the late 13th or early 14th centuries, is a marvel of medieval wood carving and now forms the centrepiece of the Medieval and Renaissance Galleries at the British Museum. Sadly, this medieval relic has since lost its Warwick connection and has been renamed the ‘British Museum Citole’.

A citole is a distant ancestor of the guitar, consisting of four strings, which would have been played with a plectrum made from a feather. This type of instrument was popular in the medieval period but survivals are incredibly rare. The exact form of a citole, as compared with a similarly shaped and round backed ‘gittern’, is much debated. However, it is almost certainly one of these instruments which is played by a pair of angels in the jewel-like stained glass of the Beauchamp Chapel in St. Mary’s Church.

The body and neck of the instrument is covered in intricate carving consisting of both decorative and figurative subjects. Boxwood, a wood often favoured by virtuoso carvers in Europe at this time, forms the body of the instrument. The predominant theme of the decoration is the forest, with delicately shaped and densely arranged oak, mulberry, hawthorn and vine leaves, amongst which several scenes can be identified. On one side a pig farmer herds his animals with a tall staff; on the other a hunter looses an arrow on an unsuspecting rabbit. However, by far the most exciting figure is the appearance of a monstrous dragon, with wings and claws menacingly displayed, perched at the top of the instrument.

It has been remarked that the subject matter and style of design is often found in medieval manuscripts, which may have played a role in its decoration. This quality of English medieval wood carving is usually only preserved in the great churches and cathedrals of the country, making this secular instrument a truly exceptional survival. One can only imagine who may have first owned this instrument over seven hundred years ago.

A gift to Queen Elizabeth I

This medieval instrument was transformed into a violin during the second half of the sixteenth century and was reputedly given as a gift to Queen Elizabeth I by Robert Dudley, Earl of Leicester. Such a rearrangement would have allowed contemporary music to have been played on it, perhaps to please the Queen’s own taste. The associations of music and love, along the lines of Orpheus the melter-of-hearts, would not have been lost to those in the sixteenth century. Applied to the top of the pegbox is an engraved silver plaque, beautifully decorated with the arms of the Queen and Robert Dudley. A date of 1578 is also hidden in the back of the instrument along with the initials ‘I P’, perhaps the name of the long forgotten maker? Alas, although it would be tempting to imagine the rooms of Kenilworth Castle were once filled with its sounds, the date is too late for her last visit there, which she made in 1575.

An engraving of the instrument was published in 1776 by Sir J. Hawkins, where it was suggested that the instrument was only then recently sold from the Earl of Dorset’s collection. It then appeared in the collection of the Earls of Warwick, probably purchased by either the 2nd or 3rd Earls during the early nineteenth century. The treasure then became a centrepiece for the 4th Earl’s celebrated Shakespeare Library, which was a collection of books, manuscripts and relics relating to the bard, amassed with the help of scholar James Halliwell-Phillips. As with many of the treasures of the Warwick collection, the Warwick Gittern was eventually sold at some point during the 1950s or 60s, and was sold to the British Museum through a ‘Mrs G P E How’.

The British Museum’s technical report on the instrument can be found here.