Nuneaton Carnival: It's a J.OKE

The carnival one pound note that caused so much trouble.
Image courtesy of Nuneaton Memories 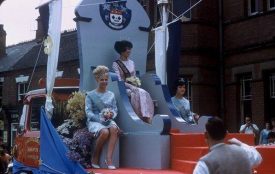 Some of the staff of Nuneaton Observer decided to enter a float in the 1965 Nuneaton Carnival. As we had a small Albion hand printing press it was decided to make a forger’s den, and print en route. The problem with that was that it was a very hot day and the ink kept drying on the slab. We had pre-printed the carnival £1 notes to give away as a souvenir of the day. A note was made up with a picture of the carnival queen Edwina Desmier  in place of Her Majesty The Queen and the words “I promise not to pay the bearer the sum of one pound.” Signed by J. Oke.

It was printed on one side only. Fortunately we checked with police and they thought that it was a brilliant idea, with the comment that if anyone took one of them in payment, more fool them. The carnival transport was provided by Rudders and Payne, Timber Merchants, the driver was most helpful and joined in the fun of the occasion.

We gave away $$s and Lira notes, with the one pound note being most wanted. A few days after the carnival I was sent for by the police… someone had made a complaint about the note. What had happened was that someone had paid for his drinks at the Co-op Club with one of the pound notes.

The note taken at a Saturday night at the bar was handed to the police as a complaint. The Police Officer I spoke to asked me to make a statement, saying how we had produced the notes. He then rang the Observer manager (at the time Gordon Smith) and told him they could confiscate all the equipment that was used to make the notes. But to resort to the law was like “using a sledge-hammer to crack a nut.”

We had to promise not to repeat the exercise, and to destroy the plates and all copies that were left over. It now seems funny, but when you’re sitting in front of Nuneaton’s Chief Officer of Police making a statement, it is serious and visions of Winson Green prison come to mind. Checking the original idea and note with the police saved us from any more trouble with the authorities. We had planned 10s. notes for Bedworth Carnival, and £5 notes for Atherstone Carnival.