You are here: Home>Locations>Leamington Spa>Nathaniel Hawthorne and Lansdowne Circus, Leamington 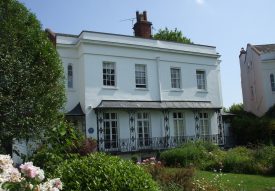 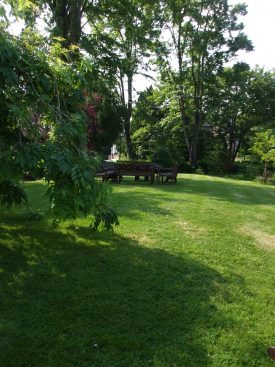 'You may fancy yourself in a deep seclusion, though probably the mark of eye-shot from the windows of all the surrounding houses.'
Photo by Benjamin Earl

Nathaniel Hawthorne is one of America’s most celebrated writers, especially famed for The Scarlet Letter of 1850. He stayed in Leamington three times, including Lansdowne Circus in 1857. On his return to the USA he commenced writing a series of essays, Our Old Home, one of which is about Leamington. Although sometimes cutting, the essay is an insight into one man’s perspective on Leamington at the time, and a couple of paragraphs are reproduced below.

In the course of several visits and stays of considerable length we acquired a homelike feeling towards Leamington, and came back thither again and again, chiefly because we had been there before… There is a small nest of a place in Leamington—at No. 10, Lansdowne Circus—upon which, to this day, my reminiscences are apt to settle as one of the coziest nooks in England or in the world.

The modest abode to which I have alluded forms one of a circular range of pretty, moderate-sized, two-story houses, all built on nearly the same plan, and each provided with its little grass-plot, its flowers, its tufts of box trimmed into globes and other fantastic shapes, and its verdant hedges shutting the house in from the common drive and dividing it from its equally cosy neighbours… In the centre of the Circus is a space fenced in with iron railing, a small play-place and sylvan retreat for the children of the precinct, permeated by brief paths through the fresh English grass, and shadowed by various shrubbery; amid which, if you like, you may fancy yourself in a deep seclusion, though probably the mark of eye-shot from the windows of all the surrounding houses.

But, in truth, with regard to the rest of the town and the world at large, all abode here is a genuine seclusion; for the ordinary stream of life does not run through this little, quiet pool, and few or none of the inhabitants seem to be troubled with any business or outside activities. I used to set them down as half-pay officers, dowagers of narrow income, elderly maiden ladies, and other people of respectability, but small account, such as hang on the world’s skirts rather than actually belong to it. The quiet of the place was seldom disturbed, except by the grocer and butcher, who came to receive orders, or by the cabs, hackney-coaches, and Bath-chairs, in which the ladies took an infrequent airing, or the livery-steed which the retired captain sometimes bestrode for a morning ride, or by the red-coated postman who went his rounds twice a day to deliver letters and again in the evening, ringing a hand-bell, to take letters for the mail.

The full essay can be read at Project Gutenberg.