The Murder of Ann Tennant of Long Compton (Part Two) 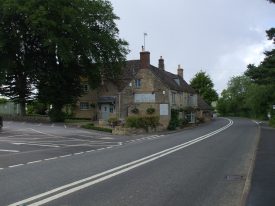 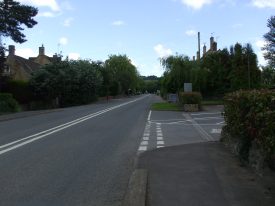 The likely road on which Ann Tennant was murdered.
Image courtesy of Benjamin Earl 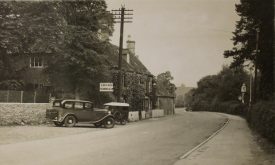 The trial of James Hayward for the murder of Ann Tennant was held three months after the inquest, at Warwick Crown Court on Tuesday 14th and Wednesday 15th December, 1875, before Baron Bramwell and a Grand Jury.

Mr. Hayward seems to have been somewhat confused and struggled with the proceedings, which are recorded in the newspaper:

To the first question addressed to him by the Court which was whether he pleaded guilty or not guilty, the prisoner replied, “I be sorry I hurt the woman, but she tormented me for a long time in witchcraft.”

His Lordship: “Do you plead guilty or not guilty?”

Prisoner: “I hurt the woman.”

His Lordship: “He has to plead now and make his defence afterwards.”

Prisoner: “I did not kill the woman.”

His Lordship: “Then you are not guilty.”

Prisoner: “I did not kill the person.”

His Lordship: “Do you say Not Guilty?”

The plea of not guilty was then recorded.

There seemed to be two sides to the defendant – some called him a ‘wild man’ and one said that ‘when he got drunk he ran about like a madman’. However, others did not consider him particularly strange. For example, P.C.Simpson said that ‘as far as he was concerned Hayward was a quiet peaceable man whose father and mother both went to chapel’. However, his religion may have played a role in his actions: a witness stated that Hayward ‘had a Bible and had marked passages in Leviticus, Micah and the Acts of the Apostles which he claimed justified his actions.’

Then there was the question of the mental health of the defendant. Dr. Parsley, from Hatton Asylum, said he had examined Hayward and found him to be ‘of sufficiently sound mind to understand the proceedings in court. He was essentially a feeble minded man thoroughly imbued with the idea of witchcraft.’ Mr J. R. Nunn, surgeon at the gaol, said that ‘he considered that Hayward had insufficient brain power under a sudden impulse to control his actions. He would not consider an action wrong in the same light as a sane person.’

It seems the evidence was sufficient for the jury: ‘[they] consulted together in their box for a few moments only, before returning a verdict of “Not guilty on the ground of insanity.”

Baron Bramwell commented that ‘he hoped that something could be done to disabuse the minds of the people of the village of the belief in witchcraft. It was a most mournful and melancholy state of ignorance.’

Detained during Her Majesty’s Pleasure

In the 1881 Census, James is recorded as an Inmate in Broadmoor Criminal Lunatic Asylum, near Sandhurst in Berkshire, but is not recorded as being an Inmate in the 1891 Census. A search of the GRO Death Indexes eventually located his death in 1890 June Quarter in Easthampstead Registration District. The death certificate shows that James Hayward died on 23rd June 1890 at Broadmoor Asylum, aged 59, of chronic abcesses and dropsy.1

1. Not in Warwick Gaol as stated in some versions of this tragic event.

My account of what happened after researching my family tree can be found here.