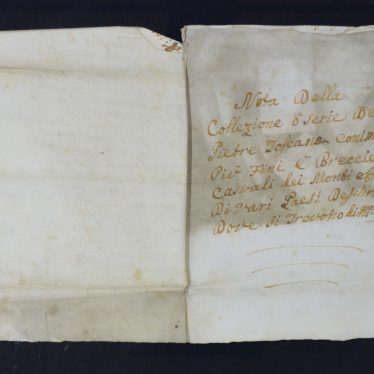 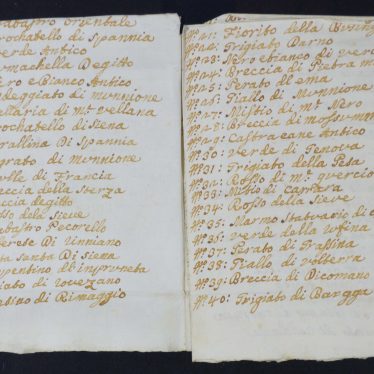 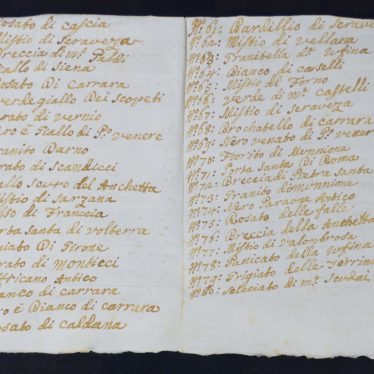 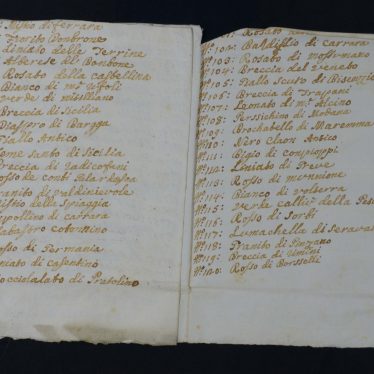 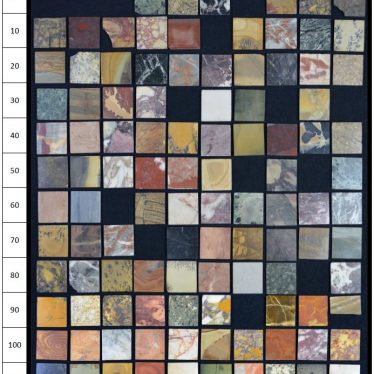 Photograph of the specimen marble tiles laid out in a grid which allows cross referencing to the list.
Warwickshire County Record Office reference CR1886_Box807_51

Recently, two marble topped tables were sold at Sotheby’s which originally came from the Warwick Castle collection. These were made by the Grimani family in Italy between 1600 and 1620 for a palace in Venice. A full description of the tables and their history can be found at: Sotheby’s Grimani Tables

During research into the provenance of these tables a surprising discovery was made in the archive of documents relating to the castle and the Earls of Warwick: a small oak box with “Brooke” inscribed on the lid in ink.

Inside are a collection of small square stone tiles. These are polished on one side and rough on the other. Some appear to be laminated onto a slate type rock, presumably for strength. Each is different from the other – 120 specimens of marble, granite and breccia* altogether. Stuffed into the lid of the box is a handwritten list of all the names, in Italian, of the samples. This list requires some conservation in order for it to be read completely.

Unfortunately, some of the tiles are missing. It is interesting to speculate whether they were sent to the manufacturers to confirm the stone to be used. More likely is that they have simply become lost during the 300 intervening years.

* Breccia is a term most often used for sedimentary rocks that are composed of large fragments (over two millimetres in diameter). The spaces between the larger fragments can be filled with smaller particles or a mineral cement that binds the rock together. It looks like concrete!