You are here: Home>Locations>Sherbourne>Pest Control, Tudor Style, and Hedgehog Termination 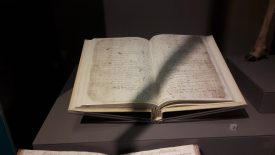 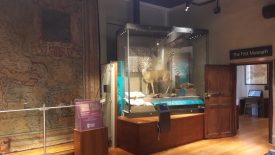 The account book is currently on loan at Warwickshire Museum, and can be seen in this case with other exhibits.
Image courtesy of Benjamin Earl 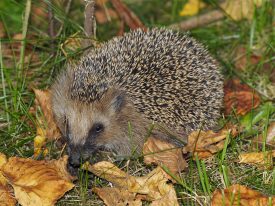 The records of the churchwarden particularly the account books can be found in abundance amongst the collections of parish records deposited at Warwickshire County Record Office. They can range in date from the 16th to the 20th centuries and can often contain a great deal of information about the churchwarden’s role as ‘guardian or keeper of the parish church’1 both for his ecclesiastical and civil duties.

Presented with a dead urchin

You would not have to spend too long turning the pages of a churchwardens’ account book before encountering an entry such as the following:

Just to be clear the churchwarden is being presented with dead urchins but before you cry out in horror, these are not young children in ragged clothes. Urchin was in fact a dialect term to describe a hedgehog, the name probably deriving the Old English ‘hirchon’ or ‘urchon’ meaning hedgehog; the sea urchin that was archaically known as a sea hedgehog. The going rate to kill a hedgehog was around 4d, or half the price for a young one (or hoglet as they are now called).

War on the wildlife population

The practice can be traced back to Tudor times. The Preservation of Grain Act, 1532 was passed by Henry VIII as a result of a series of poor harvests coupled with population growth resulting in food shortages. Therefore, the Tudors declared war on the wildlife population that was deemed a threat to food supplies. Crows, badgers, kites, and foxes were all on the hit list, and it was the duty of every parishioner to despatch these pests at any given opportunity. Some of these creatures were presented to the churchwarden and a reward collected, though most of the aforementioned list is not prominent, apart from the occasional fox. They do however feature other more easily despatched victims such as sparrows and hedgehogs.

This wholesale slaughter was so common for the next 250 years or so that it has led some to speculate that our wildlife populations were in some cases severely diminished as a result. It is not unusual to encounter multiple entries for hedgehog termination in the accounts. I recently saw a 17th century entry in Tredington for 51 hedgehogs and an adder.

Now you are probably thinking that you can understand the logic for sparrows in the context of grain supplies… but why hedgehogs? Well one theory is that the Tudors believed hedgehogs would steal the milk from the udders of recumbent cows at night time. We can speculate that this supposed taste for milk is why we used to put out saucers of it in the garden for hedgehogs to drink. The irony is of course that you should not do this, as milk is very bad for them!

1 Cripps, The Law Relating to the Church and Clergy.