You are here: Home>Locations>Warwick>Chair Collecting - an Obsession! 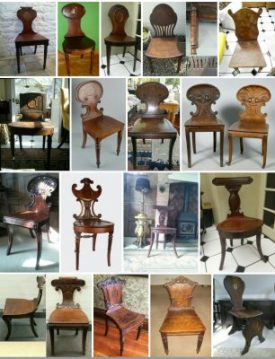 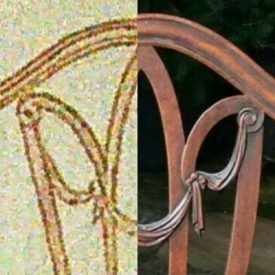 Illustrated is the back of a side chair by Gillows. I bought a set of six with a reproduction dining table from Yorkshire. You will see that the original Gillows drawing is an exact match. It is known as "the small drapery pattern".
Image courtesy of Robert Pitt 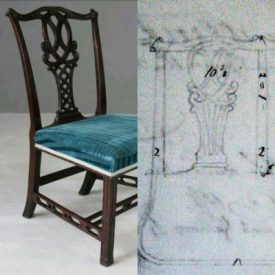 The exceptionally rare Chinese Chippendale style chair I bought online from a dealer in Cornwall can also be paired with an original drawing for a settee for a Mrs Dowker. The measurements of the drawing correspond exactly with those of the chair.
Image courtesy of Robert Pitt

When I am not working at Warwickshire County Record Office I have to admit to an obsession about chairs!

When did my obsession start?

This started about eight years ago, when I was introduced to antique furniture by a knowledgeable friend. We spent many happy hours visiting antique shops and auction sales around the country and online.  We also visited stately homes to compare what we had seen for sale or indeed bought. Often we said, “…got a better one than that!”

The price of what is sometimes called “brown furniture” has dropped in the last 20 years. This means that practically unique items of superb quality are more affordable. My particular interests lie in Georgian 18th century, early 19th and a smattering of arts and crafts (late 19th to early 20th). By careful study of an ever increasing reference library and online resources I can now spot and research the gems.  The Auction houses, particularly local provincial ones and dealers, don’t always know what they are selling and online auction sites are a source of wonderful things. If I spot something that I’m not interested in buying, I contact the seller and tell them what it is and what it should be valued at. More often than not they change their listing and make a good price.

Why chairs? Endless variety of design, are easy to lift and they fit easily in the back of my car! (Although the set of eight was a bit of a puzzle to load).

Sometimes they are not in the best of condition and require some small repairs to veneers or joints re-gluing. All require careful cleaning and waxing. Upholstery is down to taste, budget and sympathy for the chair’s period. I’m lucky in that I am learning from my mother who worked as an upholsterer for many years, having gained her City and Guilds qualifications in traditional techniques.  Time to carry out this work is the biggest problem. The collecting is easy. I have sold a few items, but having found something beautiful and done the research on it, I tend to want to keep it. The collection stands at somewhere in the region of 120 chairs. Oops!

I am particularly obsessed with a very niche chair design, called a Hall Chair. This originated in the mid 18th century, indeed Chippendale has some designs in The Director. They continued through to the Victorian period, but to my eye they became very chunky and inelegant. They were originally intended as easy to maintain, not upholstered, seating for visitors to large stately homes.  Possibly used as seating at dances. They often came in sets of four, six, eight or more depending on the size of the hall! Today they are most often found as singles and pairs. The basic design is simple: a straight back, plain seat and four legs. However, the designs can be dazzling in their complexity and craftsmanship. These examples were made for extremely wealthy patrons.

It is worth noting the pieces of furniture these craftsman made are totally robust and can used on a daily basis.  If they do break, they can be repaired.  They also hold stories, whether actual or imagined… who has sat at this table, or in this chair over the last 250 years? What have they discussed? Where did it come from? How has the world changed?

I have also written an article about my research into a specific set of Chippendale chairs from Shipston-on-Stour.