You are here: Home>Locations>Walton>The Gossip of Penelope Mordaunt

The Gossip of Penelope Mordaunt 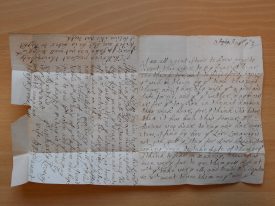 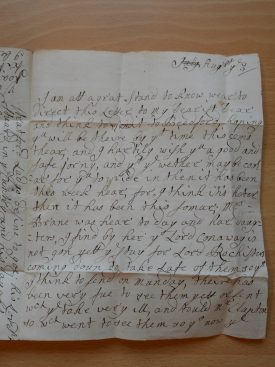 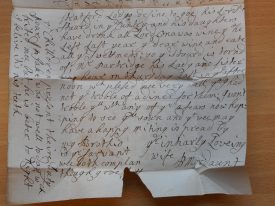 The second half of Penelope's letter. She covers the whole sheet of paper with small post-scripts.
Warwickshire County Record Office, reference CR4563/2. 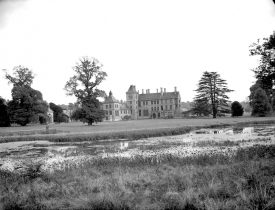 Although there are piles of weighty solemn looking documents kept in the strongrooms of the Warwickshire County Record Office, there are a good deal of gems down there that could be described as slightly more trivial as well. However we try not to judge a record by its cover here and a good thing too, because arguably some of these so-called trivial records are just as important as deeds and maps; they can colour in for us some of the gaps in people’s domestic day-to-day lives that would otherwise go unchronicled. A prime example of this is a light hearted and loving letter from the 18th century.1

The letter is written by Lady Penelope Mordaunt, to her husband Sir John, 5th Baronet. He was an active politician, having been elected to Parliament in 1698 representing Warwickshire, and he served until 1715. Although his lands were divided between Norfolk and Warwickshire, he spent most of his time toward the end of his life at his family seat of Walton Hall (now a hotel).

The letter is dated 3rd of August but no year is given; it is probably around 1700. In it Penelope informs her husband of various bits of society gossip; as a titled lady of leisure, social interaction no doubt took up a good deal of her time. She mentions a meeting with a Mrs Brane and how Lord Rochester is coming to take care of her and her daughters, and how Lord Conway’s steward was dismissed because he and his daughters had drunk ‘all Lord Conaway’s [sic] wine’ and had eaten all of the ‘swettmets’. This drunken disobedience is exactly the sort of record that gives another dimension to our knowledge of history, and makes these people seem a bit more human.

It is difficult to tell for certain, as this letter does not have a date, but the Lords that Penelope Mordaunt mentions are likely to have been Laurence Hyde, Earl of Rochester (the uncle of Queen Anne), and Francis Seymour, 1st Baron Conway (a direct descendant of Edward Seymour, Lord Protector of Edward VI). The Mordaunts were likely to have known Lord Conway reasonably well as he was the Baron of Ragley. His seat of Ragley Hall is 20 miles from Walton Hall, and perhaps this is what makes the gossip that bit more interesting for Penelope.

The Mord aunts were known to be affectionate; and it is very apparent in the letter.2  She calls Sir John her ‘dearest dear’ and signs off as ‘your intirely [sic] loveing wife’. Penelope was his second wife and was 30 years his junior, so it is pleasantly surprising, especially as their marriage was likely to have been arranged, that their correspondence is so loving. Her affection for ‘Jake’ (likely to be their young son) is also touching, as she describes how his ill health had ‘frighted’ her. Such a word implies the illness is grave, but the Mordaunts are frequently preoccupied with health and illness in their letters, and Sir John was known as a hypochondriac in Parliament.3

The document is also an interesting example of how people (in this case, the upper classes) wrote letters in the early 18thcentury. Like the best of us, Penelope makes mistakes. She starts the letter badly, getting the month wrong. There are also irregularities in spelling; although arguably this could stem from the fact that modern spelling as we know it was not as standardised in the 18th century. It looks like the letter was written at speed; and the frequent abbreviations she use encourages this argument. The abbreviation she uses most often is a ‘y’, which represents the old English letter þ, known as the thorn, standing for a ‘th’ sound. Thus ‘ye’ is the, ‘yu’ is thou/you, and ‘yt’ is that. Another frequent abbreviation is ‘wch’, standing for which.

From this one small document, we are given a window into 18th century upper class life. This is not world-changing information, but even three hundred year old gossip makes for a richer and deeper understanding of how we lived.

This article is July 2016’s Document of the Month for the Warwickshire County Record Office. Further articles can be found on their website.