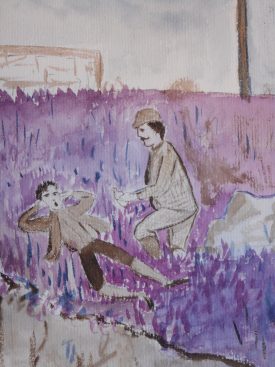 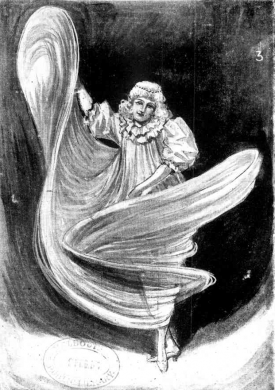 George, the Earl of Yarmouth, dancing The Serpentine Dance in the Bijou Theatre, Melbourne
Image originally published by the National Library of Australia. 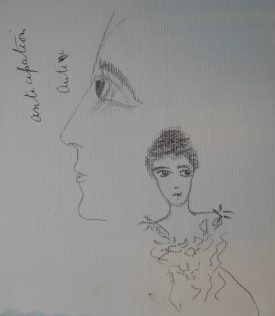 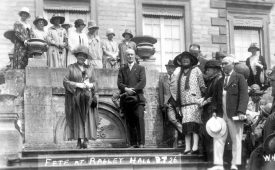 The sketchbook containing these drawings1 is one of very few documents held at the Warwickshire County Record Office relating to George Francis Alexander Seymour, 7th Marquess of Hertford and Earl of Yarmouth – owner of Ragley Hall. It is an elegant little book, containing a number of watercolour landscapes, some portraits, some full figure sketches of women (particularly in costume), and some rough notes for a play.

It’s strange how something like a sketchbook can seem so personal and intimate, and yet provide relatively little by way of tangible ‘facts’ about the artist’s life. Fortunately, there are other sources to fill in some of the gaps.

Butterfly wings and the ‘Serpentine Dance’

George was something of a character. In 1895, in his mid-twenties, he moved to Australia and attempted to set up a sugar farm, which was not very successful. Writing about his experiences for the London newspaper Leader, he thought the locals were keenly expecting him to arrive with ‘velvet robes and a gold crown’. However, other local newspapers suggested that they were ‘more interested in his departure’. He had a certain flamboyance which they disapproved of. He held male-only parties and loved dressing up and dancing in skirts. One resident recalled him ‘performing dances in a sequinned outfit with butterfly wings’.2

We know that he performed in ‘female attire’ in amateur performances.3 There is a beautiful drawing of him performing in the ‘Serpentine Dance’ in the Melbourne Weekly Times of 9 February 1895.4 This may alter the way we view some of his sketches, which depict women on stage or in costume. One in particular shows a fairly androgynous face with ruffles around the neckline, not unlike the dress worn in the Serpentine dance. The large dark eyes, straight nose and long face seem reminiscent of George’s own features. An enigmatic note next to the drawing reads simply ‘anticipation.’

Some people wrote to the newspapers claiming that by performing as a woman, George ‘endanger[ed] the prestige of the aristocracy’.5 However, others could not understand why he should not ‘act, sing or dance if he were so minded.’6 In response to the controversy surrounding his performance, he said ‘if I were in England, not the slightest notice would have been taken. Why should I be held up to ridicule…?’7

From one continent to another, George returned from Australia and then travelled to America. There, in 1903, he married Alice Cornelia Thaw, daughter to a millionaire American Railway magnate. The marriage was very much in the public eye; one newspaper was sued for libel when they suggested that he was an heiress-hunter.8 5000 people gathered to see the spectacle, and despite the efforts of a squad of policemen, it took the bride ten minutes to get through the crowd to the door.9

She gained the title of Countess of Yarmouth, but it seems she wasn’t happy with the deal; Alice filed for a divorce four years later. In the divorce proceedings10, we read that George and Alice lived together at various places including Park Hall, Salford Priors, but that the marriage was never consummated. The divorce had an edge of bitterness and there were disagreements (likely relating to her fortune), but ultimately the marriage was declared null due to ‘the incapacity of [George] to consummate the said marriage’.

Alice went on to marry again in 1913. As a scandalous aside, Alice’s brother Harry K. Thaw is remembered in history for his profligate lifestyle and for the murder of renowned architect Stanford White in 1906.11

George himself never remarried, although there was gossip that he might find himself another American heiress to fund his gambling in Monte Carlo.12 He borrowed heavily and was declared bankrupt in 1911.13 Despite Ragley Hall being his ancestral seat, George preferred living in London. The hall itself was used as a military hospital during the World Wars. It had been on the point of demolition in 1912 when the previous Marquess died, and it was not saved and restored until the 8th Marquess inherited and opened it to the public.14