You are here: Home>Locations>Warwick>A Christmas Theft of Warwickshire Holly

A Christmas Theft of Warwickshire Holly 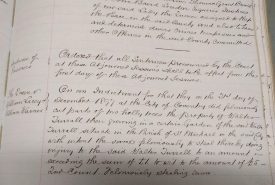 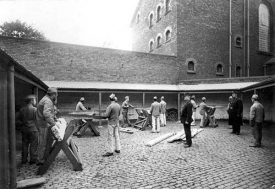 There is a variety of crimes detailed in the Warwickshire County Record Office Quarter Session records. Quarter Session documents can provide a rich source of information. For example, the judicial records often include sentences of prisoners, bastardy orders, and coroners’ reports on inquests. The sessions also cover administrative records, such as, alehouse licenses, apprenticeship indentures, local militia lists and even hair powder certificates!

As it’s Christmas however, my attention was drawn to an incident that occurred on the 21st December 1897, and involved the theft of cuttings from two holly trees.1 Whether the accused had intended to profit from selling on the holly or simply wanted a sprig each for the festive season is unclear from reviewing this document.

However additional review of the Calendar of Prisoners reveals the accused were both charged with ‘feloniously cutting parts of two holly trees then growing in a garden,’ which seems to suggest their intentions to cultivate and profit from the theft at a later stage.2

Ultimately the sentence of two months hard labour for their pre-Christmas crime may have seemed like a harsh price to pay for their holly!

These were sessions of a court, primarily in England and Wales, and were first introduced during the 14th century when Edward III appointed individuals in each county to keep the peace and preside over criminal proceedings and appeals.[3] The sessions were traditionally held four times per year and named after the quarter days on which they met – Epiphany, Easter, Midsummer and Michaelmas.3